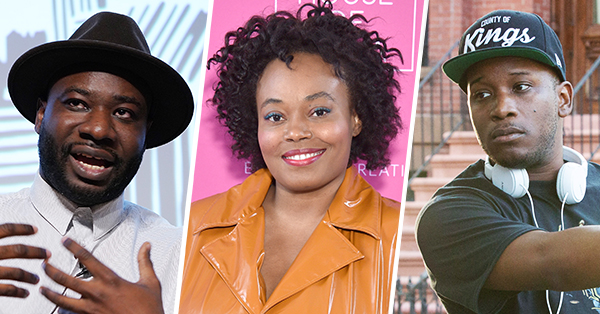 Blitz Bazawule, Numa Perrier and Stefon Bristol are among black directors expected to change the future of Hollywood

In the seven years since Steve McQueen’s 12 Years a Slave won Best Picture, we’ve witnessed what many consider a Black cinematic renaissance, where the types of stories considered awards-worthy has expanded in scope and the varying genres of films produced by Black creators has exploded.

From Barry Jenkins’ Best Picture winner Moonlight and Ava DuVernay’s Selma to Jordan Peele’s genre triumphs Get Out and Us and beyond, Black cinema thrived during the 2010s.

But any student of movie history will remember the last time Black filmmaking rose to prominence. In the late 1980s and early 1990s, Spike Lee’s Do The Right Thing, John Singleton’s Boyz n the Hood, and Mario Van Peebles’s New Jack City began what felt like a game-changing boom.

Due to white gatekeepers, however, the Black cinematic revolution ultimately went bust.

In a revealing interview with The New York Times, filmmaker Darnell Martin (I Like It Like That) said: “You think, ‘It’s O.K. – you’re like every other filmmaker,’ but then you realize, No… It’s like they set us up to fail – all they wanted was to be able to pat themselves on the back like they did something.”

The move prevented directors like Martin, Leslie Harris, Julie Dash, Matty Rich, Ernest Dickerson, Theodore Witcher, and many more from becoming household names. Considering the barriers these filmmakers faced during the ’90s, it’s imperative that during the 2020s the next generation of Black filmmakers are afforded the opportunities to build upon the strides of the 2010s.

With that idea in mind, this guide to up-and-coming directors already beginning to make a name for themselves aims to identify those set to follow Jenkins, DuVernay, and Peele in a further expansion of Black cinematic storytelling. These are the new Black directors to look out for – and support.

Pillars, If There Is A Light (shorts)

To find a brand-new voice already so fully formed is rare. While Haley Elizabeth Anderson (above left), a recent graduate of NYU’s Tisch program, first generated waves at Tribeca 2019 – Queen Latifah and Dee Rees singled out her short film If There Is a Light there – it was at Sundance 2020 that her coming-of-age short Pillars really announced her as an up-and-comer to watch; the film would win her the grand jury prize for live-action features at AFI Fest.

Pillars centers around a young southern Black girl from a devout family exploring her inchoate sexuality in the church’s bathroom only to incur the wrath of her religious father. Through her evocative aesthetics and a provocative queer narrative, Elizabeth Anderson established herself as a major force with just two shorts.

Bazawule’s later work on the sprawling Black is King only confirms his unique visual style, favouring atypical framing and compositions. His next project will be the adaptation of the Broadway musical adaptation of Alice Walker’s novel The Color Purple, due to hit theatres in 2023.

Janicza Bravo’s past credits include episodes of the acclaimed TV shows Atlanta and Dear White People, and her offbeat feature debut, Lemon, but it’s the 2020 Sundance favorite Zola that’s soon to make her a household name.

The film is an adaptation of an infamous – and viral – 148-tweet Twitter thread about a stripper who goes on a wild cross-country trip and the chaos that ensues once she gets there. Bravo and co-writer Jeremy O Harris creatively use Twitter notifications and side-splitting asides to craft an unpredictable stranger-than-fiction comedy addressing assault and cultural appropriation, and one that will hit hard with fans of fiercely inventive indie cinema.

When Spike Lee produces your film you better deliver. Stefon Bristol, in his ambitious feature debut See You Yesterday, indeed delivered with an ingenious sci-fi time-travel romp that explores police brutality just as nimbly as it plays with theories of relativity.

The filmmaker’s unique premise, which sees a science prodigy fashioning a time machine so she might save her brother from a police officer’s wrath, thoughtfully mashes sharp social commentary with popcorn Blockbuster sensibilities. And as Shannon Miller writes in her review for AV Club, “[Bristol] finds… a harsh reality that is achingly familiar to the people who have to navigate it every day.”

Though the prison industrial complex adversely affects Black people, it feels like the bulk of prison films – from Kiss of the Spider Woman to Dead Man Walking – feature white protagonists.

In Clemency, Chukwu measures the personal weight that capital punishment imposes on both the prisoner and the officiators – the way that taking a life zaps the glow of your own. Chukwu is currently in pre-production on Till, the story of Emmett Till.

JD Dillard is so well-known among cinephiles and genre fans, it’s odd to call him up-and-coming. His subversive first feature Sleight vividly reimagined the superhero genre through the eyes of a Black street magician. His follow-up Sweetheart, a spine-tingling creature feature set on a deserted island, brilliantly blended Cast Away and The Creature from the Black Lagoon.

More than a couple films struggled to break through in the early crazy days of the pandemic: Released in February 2020 on Video On Demand, Rashaad Ernesto Green’s swooning slow-burn summer romance Premature was one of them. This patient love story sees Harlem teen Ayanna (Zora Howard) dating the significantly older, secretive Isaiah (Joshua Boone).

Immediate passion soon gives way to questions and then heartbreak. With Premature, Ernesto Green crafted a vulnerable coming-of-age narrative brave enough to not be dominated by Black pain, but tenderness. Since the film’s release, he has further honed his craft by directing episodes of The Chi, Looking for Alaska, and Proven Innocent.

To evoke the words of Black Panther Fred Hampton, one of the central figures of Shaka King’s upcoming Judas and the Black Messiah: this director is a revolutionary. After bouncing from the acclaimed TBS comedy People of Earth to the equally heralded Hulu sitcom Shrill, he entered the drama arena with his visceral biopic of Hampton (Daniel Kaluuya), Chicago’s slain Black Panther chairman, set for release this month and already earning awards-season buzz.

King, however, doesn’t rely on traditional biopic storytelling. Following in the footsteps of Andrew Dominik’s The Assassination of Jesse James by the Coward Robert Ford, he translates the story of Hampton through the man who will betray him, William O’Neal (Lakeith Stanfield). Considering how few biopics exist of Civil Rights leaders – with the glaring exceptions of Spike Lee’s Malcolm X and Ava DuVernay’s Selma – King plays a risky gambit, but it pays off.

Often when Black filmmakers release a dud, they struggle to find a second chance. Julius Onah bucked that trend. He first directed the critically derided The Cloverfield Paradox, only to follow-up that disaster with the critically heralded Luce.

The thought-provoking latter film interrogates race and rape culture through the story of star athlete and student Luce (Kelvin Harrison Jr.), a Black teen born in a war-torn country and adopted by two white American parents who is accused by his teacher of harbouring violent ideas. Luce’s deep ensemble, which includes Tim Roth, Naomi Watts, and Octavia Spencer, marked a breakout turn for Harrison Jr. as the complex titular character and a breakout for Onah, too.

In Jezebel, writer, director, and star Numa Perrier told the true story of a young, financially desperate Las Vegas Black woman who follows her older sister into the sex industry as a webcam model. Through this girl’s eyes, Perrier intelligently explores the often misunderstood sex-trade environment and delivers a singular coming-of-age story .

In her SXSW SlashFilm review, Joi Childs notes how Perrier “takes the Black woman ‘jezebel’ stereotype and flips a middle finger towards it by jumping head first in this sensual world.” The director is presently at work on a comedy-romance starring Gabrielle Union and Keith Powers entitled The Perfect Find.

Much as the nascent days of the pandemic overshadowed Rashaad Ernesto Green’s rapturous romance Premature, Tayarisha Poe’s unflinching genre-bending debut Selah and the Spades also struggled to cut through.

Set in a high school marked by warring factions, terribly behaved pupils, and moments of hilarious violence, Selah and the Spades is a wildly entertaining drama about a power-hungry school girl ceding power to a younger upstart, and it showcases Poe’s remarkable world-building ability.

The filmmaker impressively retools the gangster subgenre, fusing it with a coming-of-age narrative that has a lot to say about the pressures of Black excellence and society’s insistence on ligating women’s bodies. Poe is now expanding Selah and the Spades into an Amazon series, a show that should be hotly anticipated.

Historically, Juneteenth celebrates the day in 1865 when slaves in Texas were told of the Emancipation Proclamation — a full two years after its passage. The stakes in Channing Godfrey Peoples’ graceful debut Miss Juneteenth are fortunately not nearly as high, yet still wonderfully compelling.

Godfrey Peoples is fittingly interested in everyday Black people – the ebb and flow of our lives, the meaningful traditions like Juneteenth that connect mere existence with freedom.

The story follows the commitment of a former pageant winner enlisting her daughter in the same contest she once hoped would change her own life. In her Vulture review, Angelica Jade Bastién perfectly surmises how Godfrey Peoples’ “Miss Juneteenth isn’t trying to make grand proclamations about what it means to be Black in America today. The film is too smart for such grandstanding. Instead, it revels in watching Black folks just be.”

Phillip Youmans emerged on the cinematic landscape fully realized. At 19 years old, he not only became the youngest filmmaker to have a film accepted at Tribeca, he was the first African-American director to win the festival’s award for best U.S. narrative feature.

The film he won with – Burning Cane – uses its Louisiana Baptist church setting to explore the limits of religion to heal morally broken people, and the agony of addiction. Ava DuVernay’s Array would later acquire and distribute Burning Cane on Netflix, and since then, Youmans has released two short films (Nairobi and Imagine a Moon Colony) and is developing a feature about the New Orleans Black Panther chapter in 1978.

In his AFI Fest Q&A following the premiere of Angel Kristi Williams’ debut feature Really Love, Barry Jenkins explained his admiration for Williams by noting that while Black love is routinely captured on screen, Black lust rarely is. Set in Washington D.C., the lush lyrical romance Really Love finds a young Black painter searching for his voice and falling for a Georgetown Law School student.

Williams crafts a sumptuous array of flirtatious scenes, before releasing a mosaic of passionate and soul-bearing sex scenes that make the path of their relationship all the more tangible. Since Williams’ Really Love is awaiting a release date, you’ll have to be on the lookout for this film that makes love and lust synonymous with its images of interlocked Black bodies.

DISCLAIMER: The Views, Comments, Opinions, Contributions and Statements made by Readers and Contributors on this platform do not necessarily represent the views or policy of Multimedia Group Limited.
Tags:
Blitz Bazawule
Hollywood
Rotten Tomatoes