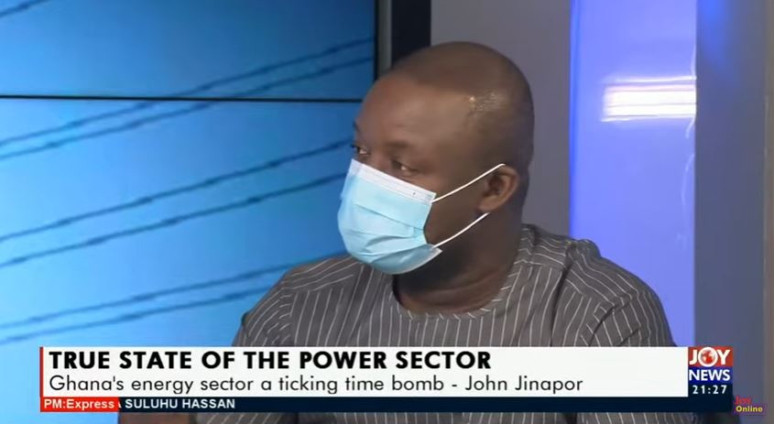 A Ranking Member, Mines and Energy Committee of Parliament, John Abdulai Jinapor has said Ghana’s energy sector is on the verge of collapsing following failure to improve the system.

The former Deputy Energy Minister’s submission comes on the back of the recent report from the Auditor-General which revealed about ¢230 million debt owed the Ghana Grid Company Limited (GRIDCo).

Meanwhile, GRIDCO and other players in the power sector had come under intense pressure and public backlash following sporadic power outages some few weeks ago.

“Now from what I am seeing, we are sitting on a ticking bomb, the system is not improving,” he said on Monday.

Speaking on PM Express, John Jinapor explained that “if you generate the power, you must fill it to the point of consumption so you must improve on the grid and make it more resilient.”

He noted that the plan for GRIDCo’s operational in 2008 which was to enable them to focus on the transmission system has gradually failed.

According to Mr Jinapor, company’s finances had deteriorated so much so that “all the ratios went into negative.”

“In terms of their revenue requirement, if you discount this with inflation it means that the real rate in terms of what they are really losing is a huge amount.”

MP for Yapei-Kusawgu Constituency recalled that in 2018, the GRIDCo Chief Executive, Johnathan Amoako-Baah observed that the office was losing 280 million following some reductions in electricity tariffs by the PURC, indicating that the revenue loss could affect the effective operations of the company.

“This is 2018, he laid it bare that look this populist move of claiming that you are reducing tariffs and bear in mind GRIDCo took the maximum shock in terms of the tariff reduction.”

He noted: “Our revenues will no more be forthcoming, so all these improvements that we need to do, maintenance works, system upgrading, replacement of transformers, enhancing and strengthening the transmission line.

“We cannot do that, and that in the near future, we’ll find ourselves in this situation.”

GRIDCo had issued a statement explaining the cause of the power outage with assurance from its boss stating works are underway to fix certain incidental problems in the power system.

But John Jinapor wondered why the power supplier was unable to inform the public of the issue to afford Ghanaians adequate preparation for the enrollment.

“Is it not simple, is it not rational that if GRIDCo is aware that it is going to undertake so-called upgrading or maintenance works and it knows that it will shut off a transformer, its informs customer or consumers,” he quizzed.”

“This is simple logic, this is not rocket science,” he added.