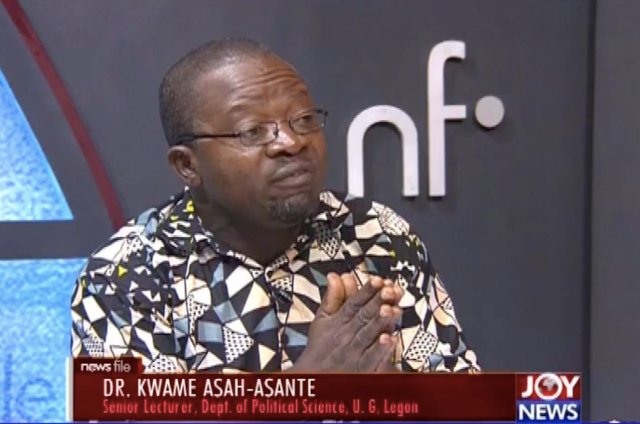 A political scientist at the University of Ghana, Dr. Kwame Asah-Asante, has accused Ghana’s political elites for the increasing acts of corruption within the country’s political landscape.

According to him, the unacceptable acts in Ghana’s politics, can be blamed on those at the top of the political ladder; that is the political elites.

Speaking in an interview with Benjamin Akakpo on the AM Show on Monday, he expressed concerns about the reports of vote buying, which characterized the recently held regional elections of the New Patriotic Party (NPP).

In his view, such acts are uncalled for and must be eliminated from Ghana’s politics.

“The political elites, take it or leave it, have corrupted the system. Because if you want votes, it is three things. It is what I call ‘RSM’. Your resources, your strategy and your message which is tied to your manifesto.

“Your human resource include the calibre of people you have put in place who’re going to contest or vote for you or you’re going to vote for. Yes, you will spend some money, but we believe that this thing must be within a certain range that doesn’t raise an eyebrow.

“But what do we see? We see it like a market place where people dole out money, throw money out, just to induce, entice and get people to vote for them. It tells you that there’s something wrong with the grassroot of our democracy. Because democracy does not flow with behaviours like this”, he explained.

He added that, “We have encouraged these things over the years, and the laws on that, the elites have thrown them away. Nobody wants to enforce anything on that. Because they themselves who are the political elite, who must enforce these things are guilty. Of course, not all of them”.

To address the political depravation in the country, Dr Asah-Asante said the only way to remedy the situation is for the political elites to agree to do away with all acts and practices that undermine the credibility of politics in Ghana.

The political scientist made these remarks in reaction to reports about vote buying and other manipulative gestures which characterised the just ended regional elections of the governing New Patriotic Party (NPP).

Meanwhile, the incumbent Ashanti Regional Chairman for the New Patriotic Party (NPP), Bernard Antwi Boasiako, has retained his seat. This is the third time Chairman Wontumi, as he is popularly called, is securing the seat.

Chairman Wontumi first won the position in 2014 and was re-elected in 2018. Before this, he was the constituency chairman for Bosomtwe.

He polled 464 votes against that of his closest contender, Chairman Odeneho Kwaku Appiah (COKA), who got 306 votes and entered the chairmanship race, having served as constituency chairman for Afigya Kwabre South for close to 20 years.

Robert Asare Bediako, a former Asokwa Constituency Chairman who entered the contest for the second time, came third with 20 votes. In his first attempt in 2018, he pulled out of the race at the last minute to allow Wontumi to go unopposed.

Kwabena Owusu Aduomi, a former Member of Parliament for Ejisu, who lost a re-election bid as MP in 2019, losing to Dr John Kumah, was entering the regional contest for the first time and came fourth with nine votes.

DISCLAIMER: The Views, Comments, Opinions, Contributions and Statements made by Readers and Contributors on this platform do not necessarily represent the views or policy of Multimedia Group Limited.
Tags:
AM Show
Corruption
Dr Kwame Asah-Asante
NPP