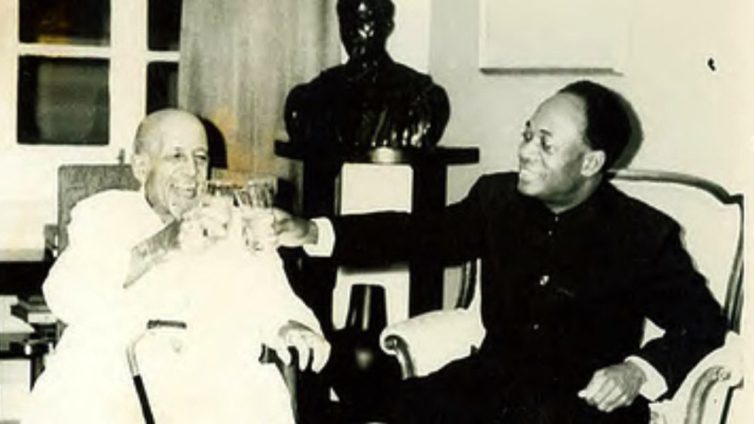 A cadre of radical African-American intellectuals and artists moved to Ghana after its independence in 1957 and contributed to the invigorating atmosphere of those times.

WEB Du Bois – the famous African-American scholar and black activist – was probably the most high-profile figure among the coterie of African diasporans who came to live here.

The first African American to earn a doctorate from Harvard University in 1895, he fought prejudice and racism in the US, speaking out against lynching and calling for the equality for all citizens.

He was one of the founders at the turn of the 20th Century of the National Association for the Advancement of Colored People (NAACP).

And he was seen generally by many Africans as the father of modern Pan-Africanism.

His role in establishing the Pan-African Congresses in the early 1900s and his agitation for an end to colonialism made him an inspiration to many African leaders.

By the time Du Bois came to live in Ghana in 1961 at the invitation of then-President Kwame Nkrumah, he was frail, sick and 93 years old.

Officially he came to start the big Encyclopaedia Africana project, but it was obvious time was not on his side.

However, he did find the peace and was accorded the respect, that America had denied him throughout his life.

He and his wife, Shirley Graham Du Bois, were given a comfortable seven-room government house in the capital, Accra, on an acre of land – No 21 First Circular Road, Cantonments – and they had a staff of four: a steward, a cook, a night watchman, and a driver who was responsible for the two cars given to them.

To set the tone for the conversation in the home which was a hive of activity, the Du Bois couple decorated it with the busts of Karl Marx, Lenin and Chairman Mao.

The diasporan intellectuals were known as “Afros” by the locals, who kept well out of their sometimes furious internal ideological rows.

Some of those names still ring a bell: Maya Angelou, George Padmore (there is a library named after him here in Accra), Marcus Garvey, Bill Sutherland, Julian Mayfield and the dentists Robert and Sara Lee.

Pull for US tourists

There will certainly be a beautiful symmetry to the story when No 21 First Circular Road, the current Du Bois Memorial Centre in Accra where the couple is buried, becomes a world-class destination for scholars and heritage tourists.

The government of Ghana and the Du Bois Foundation recently signed an agreement in New York to transform it into “a vibrant, cultural and research centre”.

It is already the fulcrum of African diaspora activity, playing host to the yearly Emancipation Day wreath-laying, the annual Nkrumah-Du Bois-Padmore Memorial lecture series and serving as the offices for the African-American Association of Ghana and the Diaspora African Forum.

It attracts heritage tourists who come to pay homage and is also a popular pop-up market for artefacts and fashion items during weekends for Ghana’s growing African diaspora community.

The proposed multi-million dollar complex will be designed by, who else: Sir David Adjaye, the famous Ghanaian-British architect.

He’s the designer of Ghana’s National Cathedral, which is currently being built, and for the purposes of the Du Bois-American connection – the National Museum of African American History and Culture in Washington DC, which opened in 2016.

The complex will emphasise the fact that Ghana has always sought to attract the African diaspora.

The historic 2019 “Year of Return” and “Beyond the Return” campaigns that encourage the return to the continent, and to Ghana in particular, of African diaspora from around the world is not new to us.

This is a drive that has been ongoing since independence.

More than half a century on, Stevie Wonder and other black Americans are continuing the tradition by taking the decision to come and live in Ghana.

During the Year of Return in particular there were many high-profile black visitors to Ghana, including Idris Elba, Boris Kodjoe, Steve Harvey, Cardi B and Naomi Campbell – treading a well-known path.

Du Bois died in his Cantonments home on 27 August 1963, a day before the famous March on Washington, at which US civil rights leader Martin Luther King made his “I have a dream” speech.

This is a drive that has been ongoing since independence.

More than half a century on, Stevie Wonder and other black Americans are continuing the tradition by taking the decision to come and live in Ghana.

During the Year of Return in particular there were many high-profile black visitors to Ghana, including Idris Elba, Boris Kodjoe, Steve Harvey, Cardi B and Naomi Campbell – treading a well-known path.

As is well known, no-one does a funeral like Ghanaians and he was given a full-scale state funeral.

During the ceremony, reports say there was a brief and powerful rainfall that stopped as suddenly as it had started.

According to our traditional beliefs, the rainfall signified that Du Bois had been welcomed among the gods of the land.

Five months before he died he was granted Ghanaian citizenship – after the US government refused to renew his passport.

He said that becoming a citizen of Africa’s first independent country south of the Sahara was the happy end of a journey begun by his great grandfather who had been stolen away from the continent into slavery.

“I have returned so that my remains may mingle with the dust of the forefathers,” he said.

“Now my life will flow on in the vigorous young stream of Ghanaian life which lifts the African personality to its proper place among men. And I shall not have lived and worked in vain.”

The hope here is that the new Du Bois museum complex will attract more returnees.

The aim is to create a living museum that revives the transformative spirit and vision of Du Bois for a unified ancestral home for Africans in the diaspora.

The complex will serve as a historic memorial site where visitors can honour his life and legacy, connect to their cultural and ancestral roots, and serve as an impetus to inspire solidarity between people of African descent.

Ghana is hoping that having been the main gateway through which most of the slaves were transported during the transatlantic slave trade, the country will be the main source for Africans in the diaspora to reconnect to the continent.