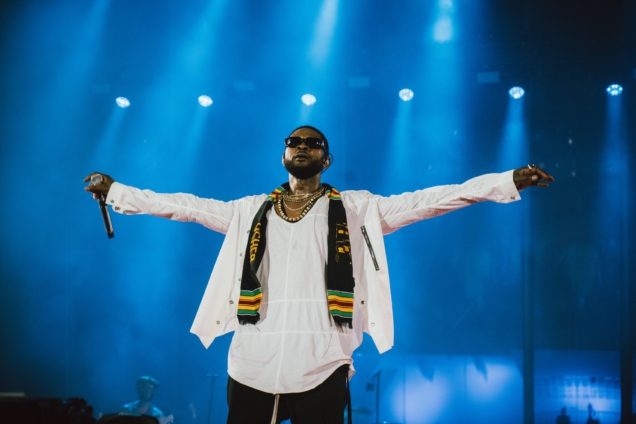 The Global Citizen Festival 2022 delivered one of the best shows Ghanaians have ever witnessed.

From stage design and sound to artistes’ craft and delivery, audiences both at the Black Star Square and at home were enamoured by the event.

First of all, every single artiste that graced the stage on Saturday at the Black Star Square in Accra gave off some of the best performances Ghanaians have witnessed in the past years.

Stonebwoy, Gyakie and Sarkodie are three performers Ghana has loved since their debut into the industry.

Reggae/Dancehall artiste Stonebwoy has always been known as one that slays a live performance and if the appreciation on the grounds is anything to go by, he lived by his tag.

Gyakie never disappointed delivering one of her best performances on the Global Citizen stage.

Sarkodie’s performance of back to back hits like Original, Illuminati, Pizza and Burger among others had the crowd going crazy with many labelling this as one of his best performances ever.

Tems gets the crowd going

Nigerian singer Tems got the crowd singing to her every song including Damages, Crazy Tings and Essence.

Stormzy for the first time performed in Ghana at the Global Citizen Festival. The British rapper had the crowd sing along to songs like Heavy is the Head, Own It and Blinded by Your Grace.

Whoaaaa what am i seeing chale Stormzy just got another fan for rocking that Daddy Lumba T- Shirt boy is too much herrr..✊🏿🙌🏿🙌🏿 #GlobalCitizenFestival pic.twitter.com/QLzCfPeE5b

In honour of his first performance in Ghana, the rapper paid homage to legendary Highlife artiste Daddy Lumba. He wore a t-shirt with the faces of the revered musician in his prime printed on the front.

He also surprised the thousands at the Black Star Square when he introduced Yaw Toga and subsequently Kwesi Arthur to the stage for the ‘Sore Remix’ performance.

SZA touched on her first trip to Africa

There had been some speeches before SZA’s performance. The crowd had slightly dispersed and tuned out while waiting for the next performance.

But the R&B singer/songwriter’s presence on stage drew screams and shouts from the audience. Many who were taking breaks or buying stuff rushed to join others to witness SZA’s brilliant performance.

The singer said she was taken back by the warm welcome she has received since coming to Ghana – her first trip to Africa.

She also noted that being the first time in Africa she feared the crowd may not know her or her songs – a statement that got cheers and “we know you” choruses from the crowd.

Between breaks, Kojo Manuel and DJ Mic Smith come on stage to entertain the crowd while the organisers set the stage for the next performer. During the long wait for Usher, DJ Mic Smith alongside Kojo Manuel acting as host played back to back classics from VIP, Shatta Wale, Mzbel, Samini, and many hits from the 2000-2010 era.

Usher stunned the crowd with his performance. He opened with ‘Caught Up’ then performed many hits including ‘Party’, ‘My Way’, ‘Confession’, ‘Burn’ and ‘Nice and Slow’.

He then surprised the audience when he called on to the stage three Nigerian artistes.

Oxlade was the first and performed ‘Ku Lo Sa’ then Tiwa Savaged graced the stage to perform ‘Somebody’s Son’ and lastly Pheelz entertained the crowd with ‘Finesse’.

For his final set of songs, dancers from DWP Academy, co-founded by popular dancers Dancegod Llyod and Afrobeats joined Usher on stage.

The choreography for the performance was created by Afrobeats.

.@Usher x @dwpacademyworld performance at the #GlobalCitizenFestival was pure fire. Congrats @RuddyKwakye and team for the pre and post- production. 👏🏾👏🏾👏🏾
pic.twitter.com/OZ00wN19YA

#GlobalCitizenFestival culminated in $2.4B to end extreme poverty. From all of us to all of you who took action — ᴛʜᴀɴᴋ ʏᴏᴜ ♥️ https://t.co/TSKVyQdGak pic.twitter.com/uDke46q3os