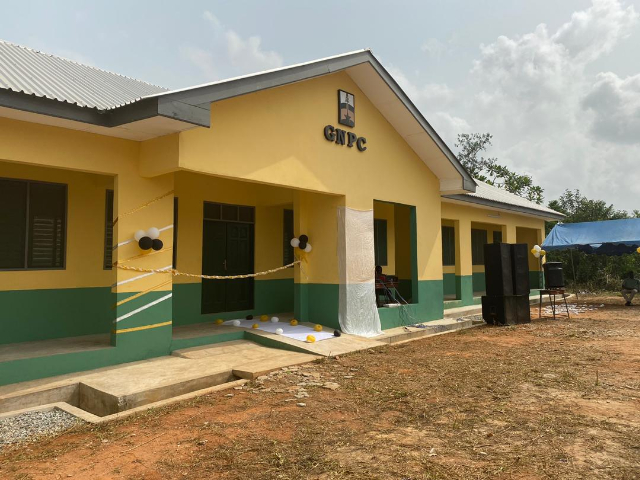 At a short ceremony to mark the occasion, the Foundation, led by the Executive Director, Dr. Dominic Eduah, expressed his joy at the successful completion of the project.

He said, “This commissioning is symbolic of the Foundation’s aim to continually impact lives. In the next five years, we will impact more than 10 million Ghanaians through our projects which fall under three thematic areas – Education and Training, Economic Empowerment and Environment and Social Amenities.

Dr. Eduah went on to commend Daboase for their stellar cooperation and support of the project contractor, and promised the school a sanitary facility, on the condition that the classroom block remained in good form. The Foundation is already set to also provide a borehole system for the school.

Present at the commissioning were the acting head of the Environment and Social Amenities unit, Madam Lubaabat Habib-Jawulaa, the former Regional Director of Education for the Western Region, Nii Lante Cleland, the District Director of Education, Madam Ernestina Christina Winful, as well as the headmistress of the school, Madam Irene Rebecca Ampaw, her assistant, Madam Aya Harrison, and the students.

The Chiefs and elders of Daboase, who donated 103 acres of land for the building of the school’s new site, were also in attendance.

The headmistress, Madam Apaw, thanked the Foundation for coming to the school’s aid and said that the classroom block would go a long way to accommodate many of her students.

She said, “After the introduction of the free SHS policy, enrollment increased, but our old site was in such a deplorable state, and we didn’t have sufficient space for our new numbers. We are grateful to GNPC and to all the other organisations which have provided us with these facilities, and we look forward to more infrastructural growth.”

The District Director of Education, Christina Winful, commended GNPC Foundation for its massive contribution to societal change, and stressed on the need for continued collaboration to maximise efforts.