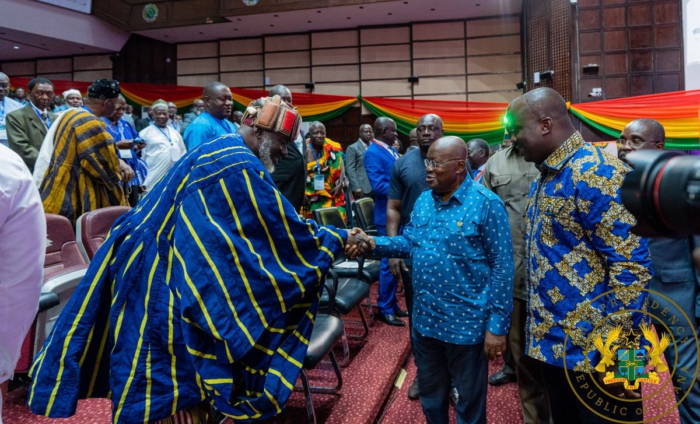 President Akufo-Addo has opened a National Lands Conference in Accra, with a charge to the Lands Commission to ensure the Commission goes fully digital.

The four-day national conference, which is being held under the theme, “Leveraging National Land Policy, Legislation and Institutional Capacity towards Sustainable Socio-Economic Development” brings together stakeholders in the management and administration of lands in the country, including traditional leaders, Members of Parliament, the Judiciary, academia, civil society organisations, among others, to deliberate on leveraging land policy and legislation for socio-economic development.

The Conference was organised by the Ministry of Lands and Natural Resources and the Lands Commission, in partnership with the Department of Land Economy of Kwame Nkrumah University of Science and Technology (KNUST) and COLANDEF, with support from GIZ and the German Cooperation.

Speaking at the Conference on Wednesday, December 7, 2022, at the Accra International Conference Centre, the President commended the Lands Commission for moving some of its services online, but said it is still unacceptable that the Commission still operates largely manual in this age of technology.

“We cannot deliver an efficient land administration if documents on land have to be processed manually. We must, therefore, expedite action on the digitalisation agenda, and ensure that the Commission goes fully digital,” the President said.

He underscored the importance of land to socio-economic development. He said virtually all human activities revolve around land, with some ninety percent (90%) of our population depending, directly or indirectly, on land for their livelihoods. That is why, according to the President, Government prioritised the passage of the Land Act, 2020 (Act 1036), which had been in the draft stage for over twenty (20) years.

The President said several interventions have been made over the years, particularly through the Land Administration Project (LAP), but the country’s land administration is still fraught with several challenges.

He pledged Government’s commitment to work with all stakeholders to ensure a land administration that is fit for purpose.

The Minister for Lands and Natural Resources and Member of Parliament for Damongo Constituency, Hon. Samuel A. Jinapor, in his remarks, said the land conference is the first of its kind in the history of the country and seeks to provide policy direction for land administration through broader consultations.

He said the Land Policy of 1999, though still relevant, does not address new challenges posed by technological advancement and infrastructural development.

He bemoaned the several challenges in land administration in the country, including conflicting judicial decisions, but said the Ministry and the Lands Commission have been working together, to deal with these challenges, through interventions such as online searches, the use of drones for surveying, and decentralisation of land services.

He said the Ministry will continue to work with the Lands Commission and all stakeholders to deliver “a robust and functioning land administration, which will discard the usual inefficiencies, fraud and delays, and which will be anchored on the principles of transparency and integrity.”

On his part, the Executive Secretary of the Lands Commission, Mr. James Dadson stated the purpose of the Conference saying the National Conference is to create a platform to discuss policy options and experiences to foster high levels of ownership of interventions and promote efficient land administration in Ghana.

He acknowledged and thanked the President, the Lands Minister and his deputies and all other partners for their support, adding that he has no doubt that with the choice of resource persons spearheading discussions at the conference, they will bring their expertise to bare and ensure that practical recommendations are made for effective land administration.

He encouraged all to participate fully at the conference to ensure that the land economy of the country takes its rightful place in the government’s transformation agenda as he believes that “If we get it right with Lands, we will surely get it right with all other sectors”

The Conference, which begun on Tuesday, will end on Friday and is expected to produce a set of recommendations for addressing the various challenges with land administration in the country.

DISCLAIMER: The Views, Comments, Opinions, Contributions and Statements made by Readers and Contributors on this platform do not necessarily represent the views or policy of Multimedia Group Limited.
Tags:
Digitilisation
Lands Commission
Ministry of Lands and Natural resources
President Akufo-Addo