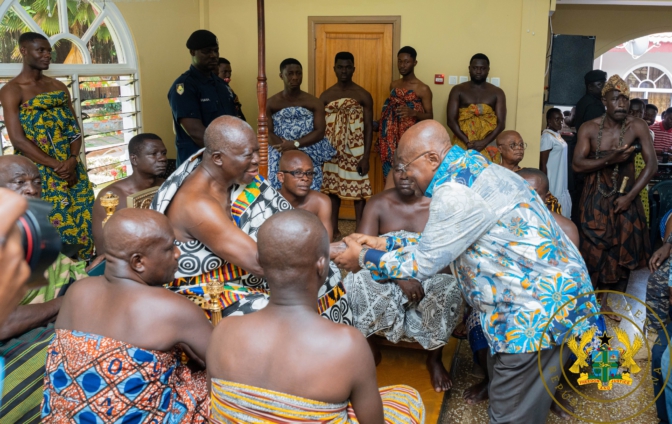 The Asantehene, Otumfuo Osei Tutu II, has urged President Akufo-Addo to go out and tell the success story of his administration.

He said it was always important for the President to let Ghanaians know what he had been able to achieve so that the people would appreciate his work.

The Asantehene said this when the President called on him at the Manhyia Palace yesterday at the start of his four-day official visit to the Ashanti Region.

Otumfuo Osei Tutu said it was good that the President was in the region to inspect development projects undertaken by the government and wished him well on his visit.

He also expressed appreciation to President Akufo-Addo for making it a tradition to seek his blessing at the Manhyia Palace before embarking on official trips to the region.

He recalled that on the two occasions that Nana Akufo-Addo had contested the presidential election, he had visited him at the Manhyia Palace to seek his blessing, adding that he would continue to pray for the President to succeed.

Otumfuo Osei Tutu said he had religiously followed the President’s delivery and expressed the hope that by the time his mandate was over, he would have achieved what he had promised to do for the country.

Briefing Otumfuo Osei Tutu on his visit, President Akufo-Addo said he was in the region to inspect some of the projects being undertaken by his government.

He said his critics had accused him of sidelining the Ashanti Region in the development of the country and indicated that by the end of his tour of the region, those critics would be silenced because it would come to the fore that the government had undertaken massive development projects in the region.

Giving examples to buttress his assertion, the President said the Ashanti Region had benefitted from improved road development, with over 300km of asphalted overlay already undertaken, while 32 hospital projects were being undertaken.

On illegal mining, the President assured the Asantehene of the government’s resolve to bring an end to the menace, noting that as a result of the attention the government had devoted to the fight against the canker, the issue had become a topical one, with everyone talking about it.

He expressed delight at the way galamsey had become a topic for discussion.

DISCLAIMER: The Views, Comments, Opinions, Contributions and Statements made by Readers and Contributors on this platform do not necessarily represent the views or policy of Multimedia Group Limited.
Tags:
Akufo-Addo
Otumfuo