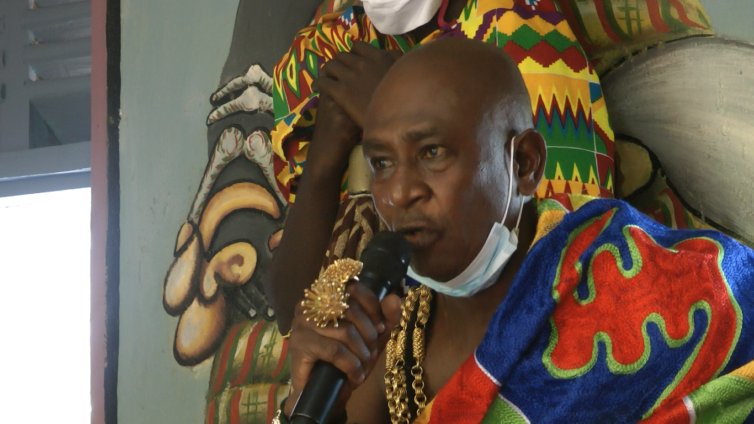 The chief of Chiraa, Barima Minta Afari II, says governance is a collective responsibility requiring that all hands be on deck to fix the wrongs in the country.

He is, therefore, calling on all Ghanaians to support President Akufo-Addo, in his bid to fix the challenges confronting the country.

The chief made the call at a durbar of chiefs and people of Chiraa in the Sunyani West District of the Bono Region. The durbar was in honour of the President, who ended his two-day working visit to the region.

A section of Ghanaians recently took to the streets of Accra in support of the #FixTheCountry campaign that is calling on the government to address challenges citizens are grappling with within the country.

But the chief, Barima Minta Afari II believes that governance issues cannot be the sole responsibility of one person.

“It is the responsibility of all, so I appeal to all of us to come together and aid the President with his vision of helping Ghana”, he said.

He wondered how Ghana can be fixed if citizens continue to indulge in galamsey, degradation of the forest, evasion of tax, lateness to work, among others.

“But if we all approach things with a different and a positive attitude, listen to what the President says, and play our roles well, Ghana certainly will progress in a direction we all desire”, he said.

Barima Minta Afari II, who is also the Dormaa “Benkumhene” expressed worry that Chiraa Senior High School does not have an administrative block after 40 years and appealed to the President to help them in that regard.

He further said he will not challenge the President on the decision to build the district hospital at Odumase, the Sunyani West Municipal capital, but noted, that they also deserve a proper health facility and other developments because Chiraa is the gateway to the regional capital from the northern part of Ghana.

Barima Minta Afari II, a board member of the Bono Regional hospital, added his voice to the chiefs of Sunyani in appealing to the President for an upgrade of the regional hospital to a teaching hospital and for a medical school to be added to the University of Energy and Natural Resources, UENR.

On his part, President Akufo-Addo thanked the chiefs and people of Chiraa for their support during the last general elections and urged them to continue to support his government.

He also asked them to thank their MP, Baffour Awuah, on his behalf for his pivotal role in his government.

He promised Chiraa SHS a brand new bus and also assured the chiefs that the town roads will be fixed because they are part of the ongoing road construction projects being undertaken by his government.