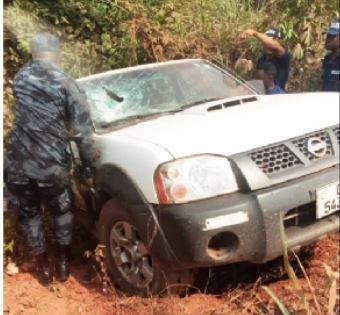 The Interior Minister, Ambrose Dery is appealing to the man whose CCTV cameras captured the robbery attacks on a bullion van leading to the killing of a police officer and another person to release the video to the Police to assist in arresting the criminals.

“This matter should be dealt with as quickly as possible.  It happened in the daytime but they raise an issue that I think I want to use this forum to [make an] appeal.  They say there is a person who owns a CCTV in the vicinity.”

The appeal follows a resistance from the owner who is currently refusing to cooperate with the police.

But Mr. Dery who was commenting on the killing of a police officer in a robbery attack on a bullion van in Jamestown said “:…What we call bullion vehicles in Ghana are just ordinary vehicles with plates on them that are not armoured.

“They don’t give the police and the cash any protection and so it is easy for bullets to go through them so they are not bullion vans,” he said

He disclosed that steps have been taken to protect policemen and women when they go on operations with a number of bulletproof vests and helmets.

“The first consignment that came in, about 4000 of them came in just before we experienced the deaths of a number of policemen in these past few years. The police officers were encouraged because we then issued those vests for them and also made provisions for them to carry side weapons to protect themselves.

“5000 is not adequate, we are dealing with over 40,000 police officers and for those who have interests such as banks and financial institutions, we do not think that the limited resources that we have for the protection of the general public should be allocated to that special needs.”

Meanwhile, Police in Kyebi in the Abuakwa South Municipality of the Eastern Region have arrested four suspects believed to have been involved in the deadly bullion van robbery attack at Jamestown in Accra.

The suspects: Collins Addae aka Kekye from Akim-Swedru; Ebenezer Gyimah, aka Peace and Musa Kamara, 26; with his brother Suleman Ketah, 26 years old alias 69, both from Guinea, are said to be on the police wanted list.

The suspects, according to reports, were fished from their hideouts at a mining site at Kyebi by the police upon information gathered by the CID Headquarters in Accra.

DISCLAIMER: The Views, Comments, Opinions, Contributions and Statements made by Readers and Contributors on this platform do not necessarily represent the views or policy of Multimedia Group Limited.
Tags:
Ambrose Dery
Bullion van robbery
Interior Minister