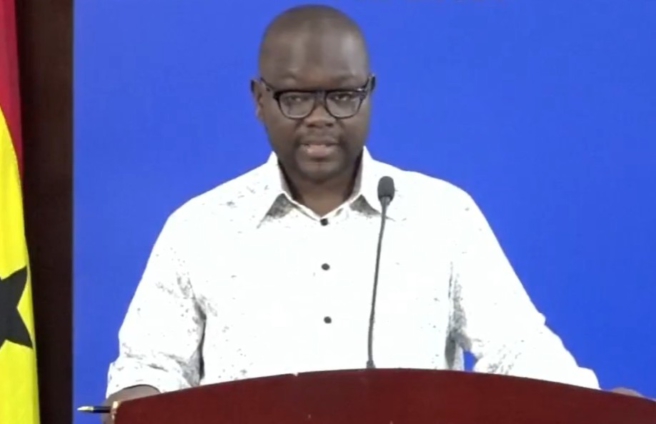 The Minister for Works and Housing, Francis Asenso Boakye has revealed that the government is looking into selling the Saglemi Housing Project to a private entity.

Speaking at a press briefing on Sunday, Mr Boakye said that the decision was taken after some assessment of the project and broader consultations.

According to him, the government could not ignore calls by the people to complete the project. This resulted in government actively engaging Cabinet, the Ministry of Finance (MoF), the Office of the Attorney-General and the Ministry of Justice.

However, upon assessment, it was revealed that the “government will have to provide additional financing to the tune of approximately US$46 million to provide off-site infrastructure, that is, water, electricity, and storm drain, to make the housing units habitable.”

“Additionally, there is the need to invest approximately US$68 million to complete the buildings and other essential on-site infrastructure works,” Mr Boakye added.

The Minister explained that after expending approximately US$196 million on the project, the government does not intend to expend additional tax-payers money towards the completion of the project.

Hence “after a painstaking period of assessment, verification and consultations, Government has decided to – Explore the possibility of selling the Saglemi Housing Project, covering the 1,506 housing units, at the current value to a private sector entity to complete and sell the housing units to the public, at no further cost to the state,” Mr Boakye said.

He noted that the proceeds from the sale will come to the state and be reinvested into other affordable housing projects.

The 2,172 acres on which the Saglemi housing project is situated were procured in 2002 during the era of President John Agyekum Kufuor.

On August 15, 2012, the late President John Evans Atta Mills gave executive approval to the Ministry of Water Resources, Works and Housing to implement the project.

The project involved the construction of 5,000 housing units for sale to public members through mortgages provided by Ghana Home Loans.

The project was implemented by Constrastora OAS Ghana Limited through a buyer’s credit of up to $200 million.

That notwithstanding, the 1506 housing units were at various stages of completion.

None of these 1506 housing units were habitable, because the project currently lacks basic amenities, such as, water and electricity, and other related amenities.

At the same time, a technical assessment report by the Ghana Institution of Surveyors in September 2020, valued the total cost of works on-site at US$64,982,900.74.

Consequently, there is an ongoing criminal prosecution at the High Court to determine the discrepancies with the funds expended on the project, vis-à-vis the valued cost of works and original project scope.

DISCLAIMER: The Views, Comments, Opinions, Contributions and Statements made by Readers and Contributors on this platform do not necessarily represent the views or policy of Multimedia Group Limited.
Tags:
Francis Asenso Boakye
Ministry of Works ad Housing
Saglemi housing project