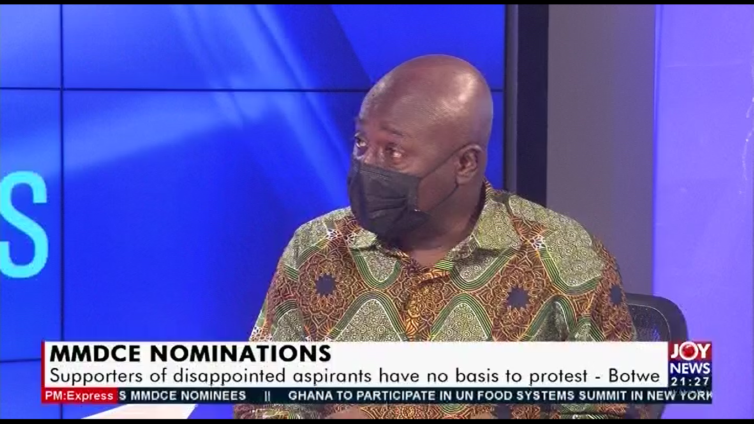 Government says it is relentless in its quest for the 1992 Constitution to be amended for the election of Metropolitan, Municipal and District Chief Executives (MMDCEs) to be made partisan.

Minister for Local Government, Decentralisation and Rural Development, Dan Botwe, said it makes no sense for national elections to be partisan and while the local assemblies, which is the base, to remain non-partisan.

Speaking to Evans Mensah on JoyNews’ PM Express Monday, he said political parties continue to sponsor candidates for District Assembly elections despite the law frowning at it.

“Our party, the NPP, believes it should be partisan and it has been practiced in many countries, big democracies. They elect people right from the local council area on a partisan basis.

“In 2020, it was in our manifesto that we shall build more consensus towards that, deepen the consultation process and it has started. We have a committee in place at the Ministry for Local Government and some civil society organisations have come to talk to us.”

“They have made available some of the documentations, contacts and consultations that they also did even though there are some divisions.

“Some of the CSOs believe we should go for the Constitutional Review Committee (CRC) recommendations where it will be non-partisan while others still believe that it should be partisan,” he said.

In 2019, President Akufo-Addo called off a referendum on the amendment of the Constitution, both in respect of article 243(1) and article 55(3) for lack of broad and national consensus.

The National Democratic Congress made a U-turn and campaigned against making local assembly elections partisan, insisting the process will polarize the country.

But Mr Botwe said that it had been long apparent that political parties were, in fact, actively involved in district assembly elections, despite their apparently non-partisan nature.

According to him, the time had come to strip the process of its hypocrisy, and accept and work with the reality of party involvement.

“It doesn’t make sense. That we shall have the superstructure being partisan and the base, you say, should not be partisan. We all know that after elections at the district assembly, political parties come out and say that in the assembly election that we had, we won about 60 per cent even though Article 55 says that don’t sponsor candidates, parties will tell you that we have many of our members who have won the elections,” he argued.

Mr Botwe, the Okyere MP, revealed that a committee under his Ministry has started processes to build consensus towards the repeal of Article 55 to make political parties sponsor candidates for local assembly elections.

His suggestion comes at a time when the government through the Ministry of Local Government, Decentralisation and Rural Development, has released the list of nominees for the Metropolitan, Municipal, and District Chief Executives (MMDCEs) positions.

Despite pockets of violence that greeted the announcement, the Local Government Minister is confident the majority of President Akufo-Addo’s nominees will be approved within 10 days from the release of the list.