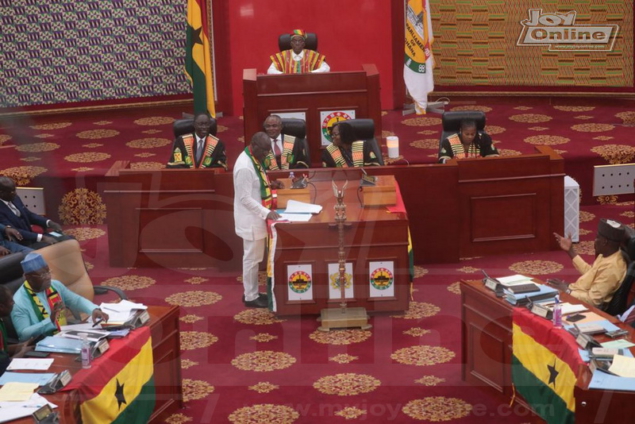 Government says it is projecting a total revenue and grants of GHS144 billion, 18.0 per cent of Gross Domestic Product (GDP).

The projection represented a 220 per cent increase compared to a target of GHS65.4 billion set in 2022.

Mr Ken Ofori-Atta, Minister of Finance, made this known on the floor of Parliament on Thursday when he presented the

Government has inadvertently increased its expenditure projections by GHS205,431 million (25.6% of GDP) compared to a target of GHS104 billion, equivalent to 17.6 per cent of GDP, representing a 197.5 per cent.

“This estimate shows a contraction of 0.3 percentage points of GDP in primary expenditures (commitment basis) compared to the projected outturn in 2022 and a demonstration of Government’s resolve to consolidate its public finances,” the minister said.

These measures he said included review on electronic levy, reforms to income tax regime, a review of the upper limits for vehicle benefits and the introduction of an additional income tax bracket of 35 per cent.

He said government intends to continue with 30 per cent cut in the salaries of the President, Vice President, Ministers, Deputy Ministers, MMDCEs, and political office holders including those in State-Owned Enterprises.

“We will place a cap on salary adjustment of SOEs to be lower than negotiated base pay increase on Single Spine Salary Structure for each year” he added.

DISCLAIMER: The Views, Comments, Opinions, Contributions and Statements made by Readers and Contributors on this platform do not necessarily represent the views or policy of Multimedia Group Limited.
Tags:
2023 Budget
Ken Ofori-Atta
Revenue