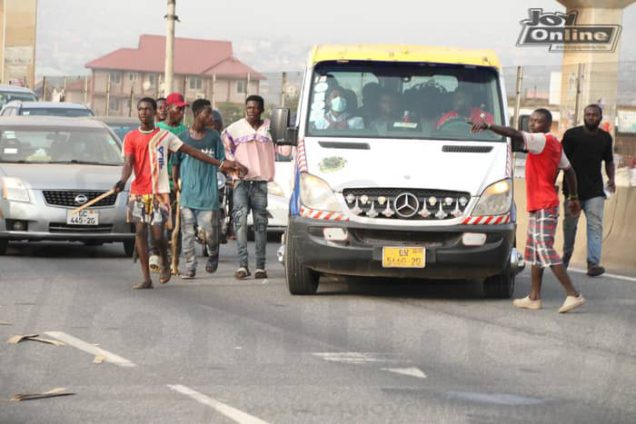 #FixTheCountry conveners have asked the government to take immediate steps to address issues raised by commercial transport operators and their unions.

The call comes in the wake of a nationwide strike by commercial drivers which left thousands of Ghanaians stranded at various bus terminals.

The industrial action is to compel government to scrap some taxes on fuel such as the Price Stabilisation and Recovery Levy, Special Petroleum Tax, the Energy Recovery Debt Levy and the Sanitation levy to enable price reduction at the pumps.

In a statement dated December 6, 2021, the conveners urged government to reduce its expenditure in order to lessen the plight of Ghanaians.

“With the effects of Covid-19 on us, we find it insensitive to throw taxes on the poor driver running through their struggles to get sales for their owners. #FixTheCountry supports the call from the Coalition [of Commercial Transport Owners] and hopes that the government works on the concerns of the drivers.”

“A meeting on how to resolve the issue which is hinged on the five taxes/levies should be held soon before the movers of our economy grind to a halt. We hope more unions come on board to use their collective effort to engage government on issues that affect their members,” the statement noted.

While commending the drivers for embarking on the strike, #FixTheCountry conveners appealed to the government “to grow some sensitive nerves and repeal the levies and taxes on petroleum products.”

“Government should not see itself as always having the power to bulldoze its way through with decisions that affect the already impoverished living conditions of Ghanaians.”

But despite the strike, some commercial drivers, were seen on the streets of Accra lending services to the many commuters who were stranded.

Commuters were permitted to patronise commercial transport in areas such as Pigfarm, Circle, Bawaleshie, Nungua, among others.

Meanwhile, fuel prices have dropped marginally at the pumps following the continuous decline in global oil prices since last week.

Prices of petrol and diesel have dropped from 6.9 per litre to an average 6.80 per litre – representing about 1.4 per cent decrement, with a few still going some 10 to 15 pesewas down.

This was revealed by GNA after monitoring some pumps since December 1, 2021.

Some experts have projected a further decline in global oil prices in the coming weeks, with many more countries detecting the Omicron variant of the coronavirus – which the experts say has led to a decline in demand for petroleum products amid increasing supply.