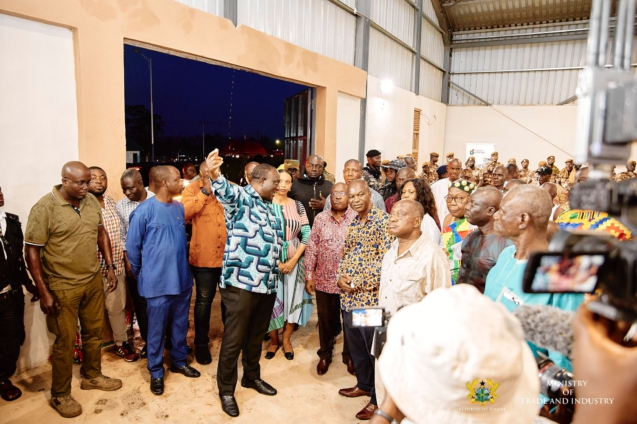 The government through the Ministry of Trade and Industry has facilitated the construction of a Common User Facility factory for the processing of maize in the Ashanti Region.

With support from the African Development Bank, the factory is expected to add value to common farm produce for the farmers and later sold to the market or for export.

Speaking to Journalists after an official ceremony to open the factory,  Minister of Trade and Industry,  Alan Kyeremanten explained that this falls within the concept of the One District One Factory initiative, hence government’s resolve to see it becoming successful.

He also argued that it will improve the economic value of farmers in the area.

“We have identified that there is no 1D1F factory here, but the common food commodity coming from this area is maize and the farmers are willing to make more income from the commodity through processing or adding value. So our resolve is to bring them together and put some funds to add up their capital and get the support of the African Development Bank to establish this facility which is replicated in the other four regions of the country”.

“This is a new model of financing for common user facilities to help our farmers earn more income from their products and also the dividends from the factory since they have become owners of the facility”, he said.

Earlier in the day, Alan Kyeremanten also inaugurated a 10 member board of the factory to be chaired by one of the farmers nominated among the Farmer Based Organisations (FBOs).

The total cost of the factory is about 6.7 million, including the cost of factory building, processing plant and machinery, offices, office equipment and a pickup vehicle.

Country Manager for the African Development Bank, Eyerusalem Fasika told Joy Business the bank believes in the Industrialisation idea of the government, hence the need to support such an initiative.

She, therefore, called on the beneficiary farmers to make good use of the facility to produce the expected results.

The 1D1F Common User Facility (CUF) is a farmer-owned agro-industrial processing facility established with seed funding from the Ministry of Trade and Industry (MOTI) under the Rural Enterprises Programme (REP).

The CUF 1D1F concept was conceived in 2017, following a policy direction by MOTI to realign the REP to be consistent with the Government of Ghana’s Industrial Transformation Agenda being implemented by MOTI.

The model seeks to enhance the ability of farmers and other agricultural value chain actors, with little or no financial capacity to establish their own Common User processing facilities to process their farm products.

In response to this constraint, MOTI sought funding from African Development Bank to introduce this new concept of establishing CUFs in five districts including the Sekyere Maize Processing facility.

DISCLAIMER: The Views, Comments, Opinions, Contributions and Statements made by Readers and Contributors on this platform do not necessarily represent the views or policy of Multimedia Group Limited.
Tags:
1D1F
AfDB
Alan Kyerematen
Ministry of Trade and Industry