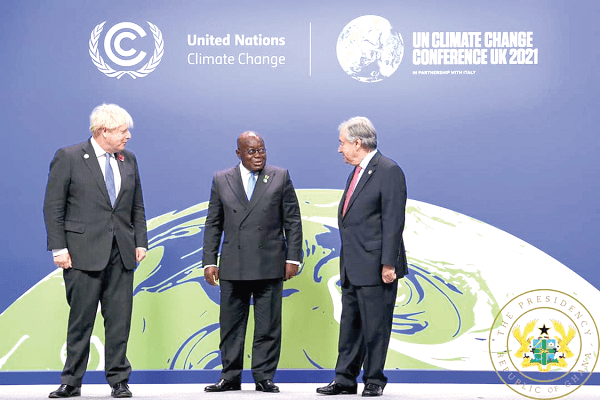 The Finance Minister, Ken Ofori-Atta, has announced government’s intention to roll out an official strategy as part of Ghana’s effort to combat climate change.

Delivering the 2022 Agyenkwa Budget to Parliament on Wednesday, the Minister said government just like other countries in the world, is committed to promoting climate adaptation activities.

This, he divulged, will be Ghana’s contribution to averting the current shifts in temperatures and weather patterns being experienced in the world.

Citing Ghana Cocoa Forest REDD+ Programme as one of the strategies, the Finance Minister noted that the initiative seeks to “reduce emissions by some ten million tonnes of carbon dioxide equivalent in the cocoa-forest landscape” after it is rolled out in 2024.

He mentioned that government through its Nationally Determined Contributions in the forestry sector will support the global target of halving emissions by 2030.

With the aim to curb deforestation in the country, he said government is determined to operationalise the Timber Legality 30 Assurance System, as part of the Forest Law Enforcement Governance and Trade process.

This, according to him, will enable government to track wood electronically to ensure that only legally compliant timber is allowed into any market.

On the part of the private sector, Mr Ofori-Atta divulged that they will be engaged to establish a Green Climate Fund to support our climate adaptation interventions.

“We shall, in addition, work with our traditional authorities and districts to issue innovative ‘mini muni adaptation bonds’ to address the issues of reclamation and re-afforestation in their localities,” he added.

He further added that for the goals to be achieved, “we will collaborate with the Global Centre on Adaptation, in close collaboration with the African Development Bank, in pioneering solutions on how to build durable infrastructure, and supporting African cities to guard against the impacts of climate change.”