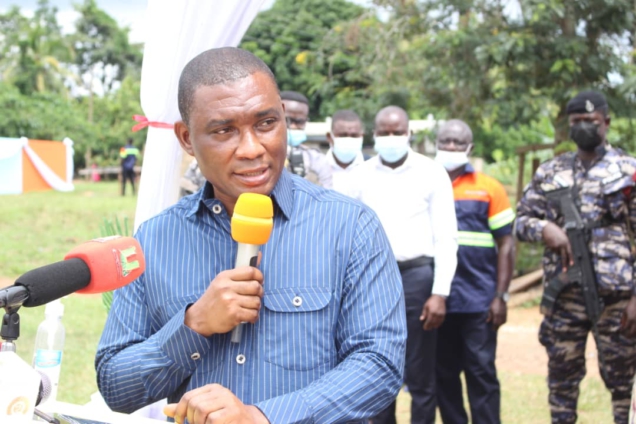 The aim is to reduce the use of mercury and other harmful substances to extract gold from rocks and alluvial deposits.

Deputy Lands and Natural Resources Minister, George Mireku Duker said the initiative will sustain the environment and reduce the dangers associated with mercury use.

The Community Mining Programme was introduced to formalize mining in selected communities across the country.

Mr. Mireku Duker was speaking at a ceremony to commission a Kindergarten built by Transeco Mineral and Mining Limited at a cost of three hundred thousand cedis at Akyem-Apapatia in the Eastern region.

The new Kindergarten block will replace an existing one, which is in a dilapidated state.

“The gold cutting machine will retrieve about 95% of our gold. It will be used without mercury and that’s how come the government has developed an interest in that to support the community mining concept. We all know the government is begging people to move out of the red zones. And when they move out we expect to create an alternative livelihood that could support the teeming youth to mine responsibly.

” As we have indicated, the government is not against small-scale mining. The government is for prudent measures to ensure we mine and mine sustainably. That is why we all have to support government,” he explained

Chief Executive officer of Transeco Mineral and Mining Limited, Godwin Armah while urging small-scale miners to adopt best practices, asked the government to clearly distinguish between small-scale and illegal mining as it clamps down on persons who destroy the environment.

“When it comes to small-scale mining, there’s always one narrative. When we mention small-scale mining people think it’s galamsey but it’s not. We have many stories that matter. It’s about doing responsible mining to ensure that we give back to society while ensuring that we protect the environment”.

We started as a gold bank and now we moved to Transeco doing mine support services for a lot of companies. We work under Xtra Gold as a tributary and out of what we got we build this school for the community. When you mine, you give back to the community but it should be properly done. Government is not against small mining, government is against irresponsible mining,” he stated.

He encouraged other firms to conform to best practices to ensure the environment and water bodies are not contaminated.