Government to set up Agricultural Development Zone in Northern Region 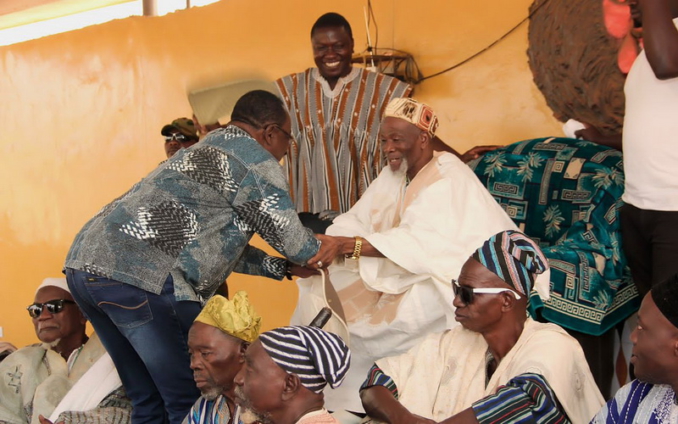 There are plans by the Akufo-Addo administration to establish an Agricultural Development Zone in the Northern Region.

The agricultural development zone, which will cover between 20-40 hectares of farm land, will be developed for prospective agriculture investors.

The Minister of Food and Agriculture (MoFA), Dr. Owusu Afriyie Akoto made the disclosure when he paid a courtesy call on the Overlord of the Kingdom of Dagbon, Ya-Na Abukari II, at his Gbewaa Palace, Yendi, in the Northern Region on Wednesday, December 7, 2022.

The visit by the minister formed part of his ongoing working tour of the northern Ghana.

“I have with me a proposal to the Ya-Na. We are proposing to set up an Agricultural Development Zone in the Kingdom of Dagbon. This zone will consist of 20-40 hectares of farm land,” he disclosed.

According to him, his ministry already has some international companies who are willing to invest in agriculture in Ghana, assuring that “I will bring them to the Kingdom of Dagbon.”

He said within the space of three to four years, the economic landscape of the Northern region will be transformed after the establishment of this “special agricultural development zone.”

This facility, he said, will provide jobs to the teeming youth in the region, adding that “we will furnish it well with accurate machinery to help brand our farm produce well for domestic and foreign exports.”

He added that the zone will not only cultivate crops but more importantly, add value to the produce.

Dr. Afriyie Akoto, however, used the visit to appeal to Ya-Na Abukari II to use his authority to help the government enforce the ban on export of foodstuff to Ghana’s neighbouring countries.

He said it was sad that his ministry continued to receive reports of foodstuff being smuggled to Ghana’s neighbouring countries. “I plead with you to use your power and authority to act as a check on the illegal export of food to our neighbouring countries. This issue has been discussed with the Regional Minister already, but I am pleading with you together with your various traditional rulers to help the government deal with it,” he appealed.

He stressed that the essence of the Planting for Food and Jobs (PFJ) policy is to inure to the benefit of farmers and by extension Ghanaians, hence “if there is an outcome of the initiative, it should benefit us in the country and not outsiders.”

In a show of appreciation, Ya-Na Abukari II warmly welcomed the minister and commended him for his hard work in the agriculture sector.

“Your visit today shows your continuous recognition and readiness to collaborate with the traditional authorities as custodians of the land and major stakeholders in agriculture and its related fields.”

“I further wish to thank the President of the Republic for the confidence he has reposed in you to continuously steer affairs of the Agriculture Ministry,” Ya-Na Abukari II said.

He encouraged the minister to continue the path of forging good working relationships with traditional authorities.

“I wish, once again, to give you the assurance and readiness of the Dagbon chiefs to collaborate with you to ensure that you leave an excellent footprint in the ministry,” the Overlord of Dagbon firmly assured.

He seized the opportunity to congratulate the 2022 National Best Farmer, Nana Yaw Sarpong Serebour, who is a traditional ruler.

“His award serves as an inspiration to the chiefs and increasing unemployed youth in the country,” he stated.

On that score, Ya-Na Abukari II called on the youth and chiefs in the Dagbon Kingdom to direct more attention to agriculture to help deal with food shortages and increasing unemployment in the country.

He bemoaned the fact that northern Ghana was still lagging behind in development.

“I must say it is unfortunate that our vast arable lands are left without any attention, and despite the enormous interventions by governments, Dagbon is still struggling with high levels of youth unemployment,” he lamented.

This, he stressed, required an immediate action and called on the minster to direct more attention to the Kingdom of Dagbon to help create opportunities for the many unemployed youth.

DISCLAIMER: The Views, Comments, Opinions, Contributions and Statements made by Readers and Contributors on this platform do not necessarily represent the views or policy of Multimedia Group Limited.
Tags:
Agricultural Development Zone
Dr. Owusu Afriyie Akoto
Planting for Food and Jobs (PFJ)
Ya-Na Abukari II