Government will fix the country, but we need time – Health Minister 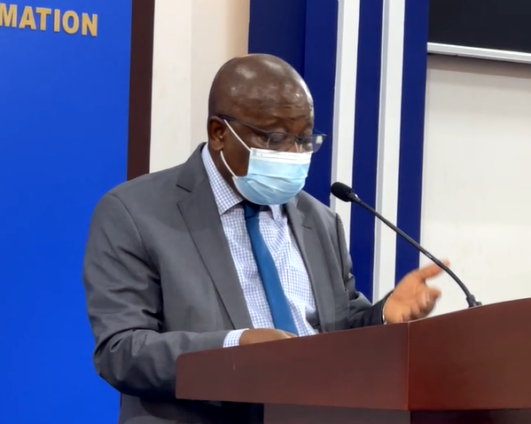 The Minister for Health, Kwaku Agyeman Manu has asked Ghanaians to give the Akufo-Addo government more time as it implements measures to fix the challenges facing the country.

According to the Minister, the Covid-19 pandemic devastated the economy of most countries and Ghana is no exception. Thus, government is working hard to resuscitate the economy to ease the hardship of the citizenry.

The Minister was responding to the demands of the #FixTheCountry Movement, at a press briefing on Wednesday.

According to him, government has done well in managing the economy through the difficulties posed by Covid-19.

He, therefore, noted that, the government needs time to “fix” the country as being demanded by the Movement.

“We couldn’t get import from China because of lockdowns and factory closures. And even when we were easing to allow people to trade, how to get ships to transport their wares to Accra, Ghana became another issue, so freight charges started increasing.

“And we know that when freight charges go up, there is imported inflation and definitely we will feel something in our country that will accumulate to some little charges,” he stated.

He continued, “We have stopped evaluating all these [effects] and we have gone ahead to form a #FixTheCountry Movement. Yes, government will fix the country but we need time.”

Mr. Agyeman Manu further admonished all and sundry to get themselves vaccinated to prevent the county from going back to its dark days.

He advised that taking the vaccine is also every citizen’s contribution to fixing the country.

DISCLAIMER: The Views, Comments, Opinions, Contributions and Statements made by Readers and Contributors on this platform do not necessarily represent the views or policy of Multimedia Group Limited.
Tags:
FixTheCountry
Health Minister
Kwaku Agyeman-Manu