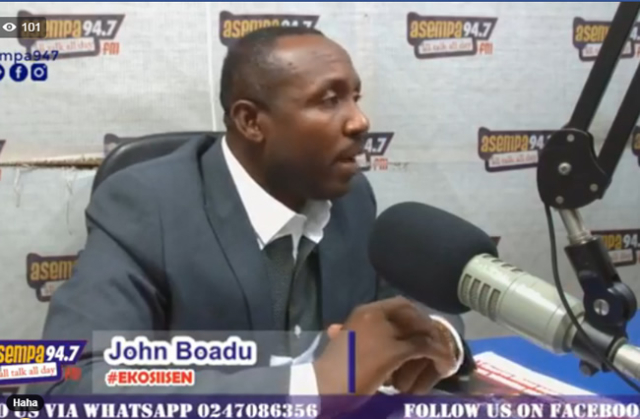 Acting General Secretary of the governing New Patriotic Party John Boadu has expressed disappointment in the former National Democratic Congress government's handling of the Gitmo 2 former terror suspects sent to Ghana from the US.

John Boadu is convinced the Mahama-led NDC government stabbed Ghanaians in the back when it failed to come clean on the decision to accept two Yemenis in January 2016.

He said there are several aspects of the diplomatic agreement that was hidden from Ghanaians which is now haunting the NPP government as it looks for options available to it following the expiration of their stay in Ghana.

The Yemenis came to Ghana in January 2016 to stay for two years under a diplomatic agreement as the United States government worked to close down its infamous detention center, Guantanamo Bay, where the suspects lived for 14 years.

Ghanaians were under the impression, the two suspects could be sent back to US or another country if the government was no longer interested in keeping them here.

But it has emerged government's options have been narrowed because of a decision taken by the previous NDC government.

The Mahama government granted them refugee status and therefore Ghana is obliged to keep them in the country if they fear to live in another. Ghana is a signatory to UN conventions on refugees which protects refugees.

The US government cannot take back the former suspects because the Mahama government failed to agree on exit plans with the superpower, the Foreign Minister, Shirley Ayorkor Botchwey has said.

NPP General Secretary, John Boadu said he was aware of plans by the government to send the former terror suspects to Morrocco which had indicated willingness to accept them.

"Particularly Morroco had agreed to take them," he said on Asempa FM Wednesday.

But t the government would later find out, it cannot send them there because the previous government had granted them refugee status.

"The NDC government had even given them passports," he said. With the Moroccan plan scuttled, it has become even more difficult to find a new host for the Yemenis, John Boadu said.

They cannot also be sent back to Yemen because of political turmoil there. The Yemenis have married in Ghana to women reportedly brought into the country.