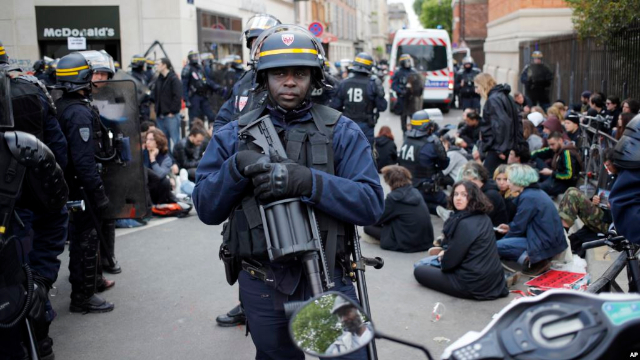 Major cities around the world have ramped up security, increasing police presence and even using drones to monitor crowds expected at May Day rallies.

International Workers’ Day, which is commonly known as May Day, celebrates the international labour movement on the first day of May every year. It’s a national holiday in more than 80 countries around the world.

France, which has been recently rankled by violent anti-government yellow vest protests, plans to deploy more than 7,400 police and dozens of drones in Paris.

Interior Minister Christophe Castaner said there was a risk that “radical activists” could join anti-government yellow vest protesters and union workers Wednesday in the streets of Paris and across the country. He said the goal was to protect demonstrators with “legitimate aspirations” and defend Paris from calls on social media to make it “the capital of rioting.”

He said other cities around France were also on alert.

In Germany, more than 5,500 officers will be deployed in Berlin where protesters, led by the “1 May Revolutionaries,” have been for weeks calling on people to demonstrate. As many as 20,000 activists are expected to protest against gentrification in the eastern district of Friedrichshain.

Across the world in Jakarta, police spokesman Commander Argo Yuwono said there will be 1,500 personnel deployed for a protest in the Istora Senayan area and 25,000 for a protest near the State Palace. He said more than 40,000 protesters are expected to take to the streets of Indonesia’s capital.

Turkish police have barricaded Istanbul’s Taksim Square, where May Day demonstrations have been held for years. The square was blocked off even though city authorities denied permits for rallies there this year.

Taksim Square gained notoriety on May Day in 1977, when 34 demonstrators were killed when shots were fired from a nearby building. Hundreds of others were injured, but no one has been brought to justice for the shooting.

In Iran, 12 members of the Free Workers Trade Union of Iran have been arrested as they met to plan International Workers’ Day celebrations, local media reported. Iran does not recognize labor unions independent of government-sanctioned groups.