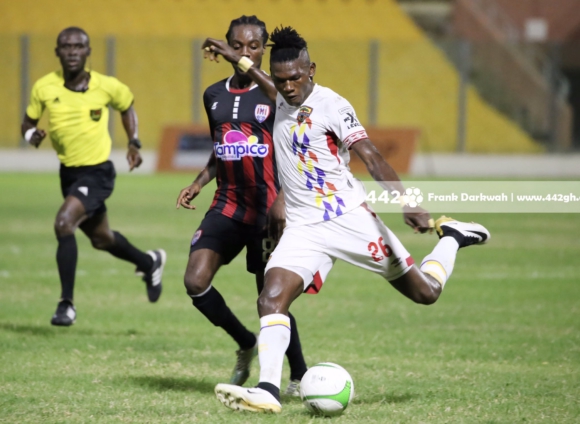 Hearts of Oak are yet to clinch three points this season following a 1-0 defeat to Inter Allies on matchday 3. Title favourites Medeama recorded a goalless draw whilst Karela United moved to first place after coming from behind to beat Dreams FC 2-1.

Asante Kotoko and AshantiGold were not in action due to their continental assignments.

Gyan is ready for the league

After Legon Cities secured Asamoah Gyan’s services in the summer transfer window, there were some concerns on his fit in the team and rightly so.

The 35-year-old had seen the latter part of his storied career blighted by injuries and fitness had also been an issue.

Before the league began, the former Sunderland striker confessed that he was not ready to enter the field yet. Legon Cities and fans had to wait for three matchdays.

In his first appearance, Gyan lasted just 20 minutes but showed flashes of brilliance against Medeama.

He nutmegged Justice Blay, arguably one of the best performers from last season, and sent supporters in Ghana and beyond buzzing. One chance was also created by the former Udinese hitman.

There is a long season ahead and eventually, we will see the full display of Gyan’s quality.

The Ghana Premier League has been believed to be an unpredictable competition in the last few years but this season has taken that belief to another level.

After matchday one, WAFA were at the summit of the log following their 4-3 win over King Faisal in Sogakope. It was no surprise as the league recorded seven draws in the opening fixtures.

On matchday two, Great Olympics showed their might and were rewarded with the coveted top spot despite the increase in victories in other venues.

The Oly Dade boys recorded a commanding 3-0 win over Legon Cities at the Accra Sports Stadium.

In the next matchday,  we saw a new team at the top of the table. Karela United moved to the first position after coming back from behind to beat Dreams FC 2-1 in Aiyinase.

Three matchdays have passed and we have seen three lead changes. It has made the competition more difficult to predict. In the near future, we should expect some more lead changes.

Karela with the early title push

Ahead of the start of the campaign, Karela were not on the lips of many stakeholders as they had not made a good account of themselves last season.

In 15 games, Karela amassed just 11 points and found themselves in the relegation zone just before the league was cancelled.

This season, they have looked like a completely different side. After drawing 2-2 with AshantiGold in their opening game, Karela recorded two straight victories over Inter Allies and Dreams.

On the league table, their name comes first with seven points, the highest tally amassed so far. A case can be made for their improved quality and coaching but another can be made on improved sponsorship.

Last month, they secured an impressive three-year deal worth $300,000 with the Ghana National Petroleum Corporation (GNPC). The scope of the deal factors in improved facilities and other benefits.

The deal has seemingly affected player performance in a positive fashion. With the way they are playing at the moment, it will not be a shock if they challenge for the league trophy until the end.

Over the years, Hearts of Oak have established themselves as one of the biggest Ghanaian clubs in history.

Taking their current trophy haul into consideration, it is no surprise that the Phobians have a huge fan base across the country.

In the last 11 years, however, the Accra-based side have not tasted silverware, sparking some level of impatience from the fans. The current campaign has shown that their problems run deeper than a trophy drought.

It first started with the shock appointment of Manuel Vaz Pinto as the technical director. The appointment did not last long as Pinto left his post after just one week in charge.

Their first scheduled league match against Aduana Stars was cancelled due to COVID-19 concerns in the camp of Hearts.

After gaining permission to feature in the competition, Hearts have amassed just one point thanks to a 2-2 draw with AshantiGold and a 1-0 defeat against Inter Allies.

The club have reportedly appointed Kosta Papic who many believe will replace current head coach Edward Nii Odoom. Also, Frederick Moore has resigned from his post as the CEO of the club after a reported number of disagreements with other authorities in the club.

The early signs at Hearts are not good and without proper guidance, the Phobians will gradually move into a state of oblivion.

Three matchdays no away win

The record for this season reads; 24 matches, nine wins, 15 draws. On the win column, none can be attributed to an away team.

In past seasons, an away win would have been recorded after two gameweeks.

On matchday one, an astonishing seven draws were recorded with only WAFA recording a victory. After the next matchday, the total win column increased to six with four more draws to add.

In the just-ended matchday, three home teams recorded wins. This season has shown the difficulty of away sides in getting positive results.

It can be attributed to many factors like less preparation from all teams, poor finishing, no hostile home fans and an even distribution of star players.

The wins are expected to come in subsequent weeks but the current tally is indeed unprecedented.

DISCLAIMER: The Views, Comments, Opinions, Contributions and Statements made by Readers and Contributors on this platform do not necessarily represent the views or policy of Multimedia Group Limited.
Tags:
Ghana Premier League
Hearts of Oak
Joy Sports