Week 15 sees the league reach the halfway stage. What key lessons did we learn from it?

TEAM OF THE ROUND: WA ALL STARS

PLAYER OF THE ROUND: DAUDA MOHAMMED (KOTOKO)

DISAPPOINTING TEAM OF THE ROUND: ASHANTIGOLD 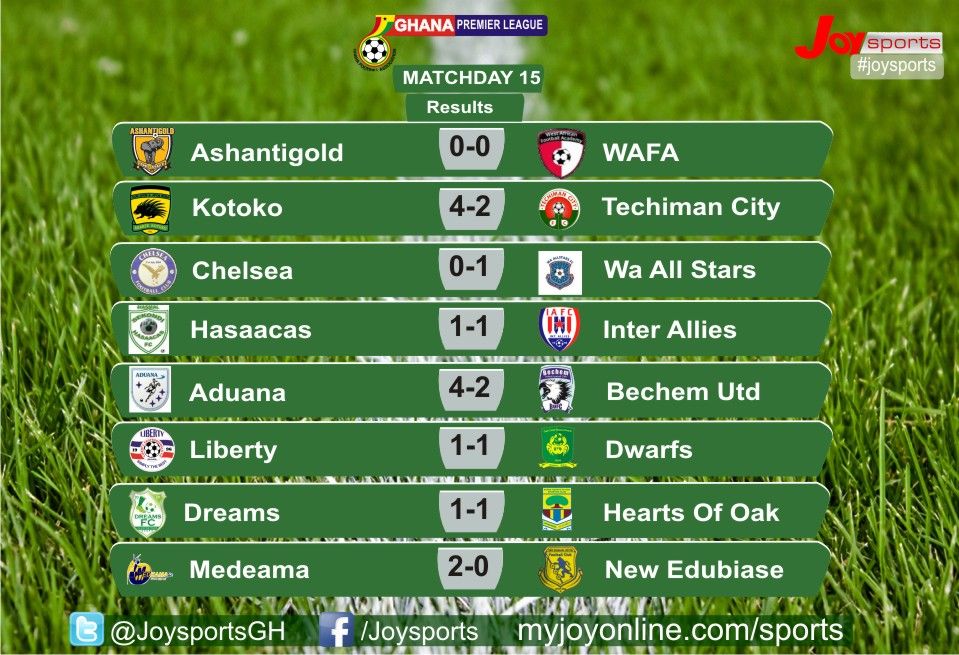 Wa All Stars stunned Aduana on matchday 2, sent Hearts of Oak to the cleaners on matchday 6 and outclassed Asante Kotoko on matchday 14. These are the other three occupants of the top 4 slot and Wa All Stars already have a head to head advantage over them. What is more inspiring is the fact that two out of these three results were picked up away from home. Despite contributing key members of their squad to the local Black Stars and Black Satellites, All Stars stood tall to end the first round on top. Undisputed first champions and well deserved.

EDUBIASE SEEM TO BE MARKING TIME

Edubiase are known to be a major selling club ever since their promotion to the league but this year’s sales were always going to harm the club. Bernard Ofori, Fuseini and Alhassan Nuhu, Latif Anabillah and Emmanuel Nti Mensah all moved on from the side. Edubiase had already complained about financial constraints after only matchday 2 and playing away from their main home in Bekwai was always going to be a problem. Edubiase have lost their last five matches and it they might fail to perform a survival act this season.

George Lamptey and his Liberty side have quietly gone about their business but they could well end up the half season second. Yes! Second and a point behind All Stars. The Dansoman side have a game in hand against Medeama at home and a win could push them into that slot. The Liberty team have relied on the security of captain Samuel Sarfo and the pace , artistry and skill of front men Bernard Arthur , Ebo Mends and Latif Blessing. The club have already targeted the title in their 20th year of existence and with such good form, this is far from being a remote possibility.

For the 10th match in 15 games, Ashantigold drew with their opponents. Draws have become synonymous with the Miners this season drawing their last 5 games. This is a far cry from their title winning campaign last season where they scored for fun and won at home at ease. The Miners have already failed to see off poor travelers Bechem United, Berekum Chelsea and WAFA at home and have equally found the going tough away. The break might serve well for the Miners to put their act together and turn the corner in the second round.

Thrown in at a point where the traditional powerhouse were struggling and bereft of confidence. Step up an ex player and arguably one of the finest players to have played for the club to restore the pride and belief of the players. Not the complicated use of tactics but simplicity and motivating key players have been instrumental in four wins out of five. Forgotten after matchday six but contenders at the halfway stage. This has been the story of Michael Osei who has brought Kotoko back to where many had expected them prior to the start of the season.

HEARTS DESERVE CREDIT FOR AWAY FORM

Hearts have not been swashbuckling all season but their solidity away from home deserves credit. Twice they have gone down away from home, twice they have responded to pick a point at difficult grounds. Such resilience and strength of character deserves plaudits. In a league which has recorded only 18 away wins, Hearts are responsible for 4.  Inconsistent performances at home has resulted in their drop in the standings but with the solid defence as the foundation, the Phobians might well smile at the end of the season. Remember, goals win games but defences win championships.

MEDEAMA HAVE TURNED THE CORNER

The Tarkwa side are back in the mix after a disastrous start to the campaign. The Yellow and Mauves have 20 points, 8 behind leaders Wa All Stars but more importantly with two games in hand. The Yellow and Mauves have picked up 13 points from the last 15 available and currently the in-form team on paper. After failing to struggle to compete on the local and continental front, Moses Armah’s side seem to have found the right balance and with coach Prince  Owusu set to join the team, they could be  a force to reckon  with in the second round. 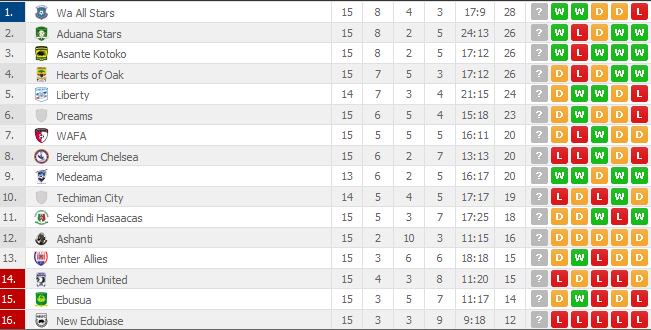