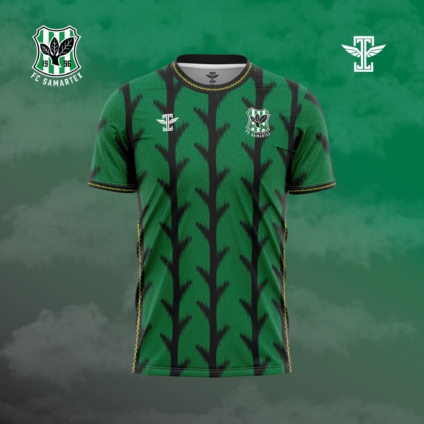 Samartex become the latest club to join American kit brand, Icarus ahead of the new season, which will be their maiden campaign in Ghana’s top flight.

Today, FC Samartex 1996 has announced that they will be partnering with the American kit brand, Icarus, for the upcoming 2022/23 season. The new kits will be worn by the newly promoted Premier League team as they compete next season.

Icarus is a creative kit brand that works with teams to create unique designs that encompass the culture, heritage, and spirit of each club, while never using pattern templates. FC Samartex will join Bibiani Gold Stars, Accra Great Olympics, Sekondi Hasaacas FC & Hasaacas Ladies, and Cape Coast Ebusua Dwarfs in receiving personalized kits designed by the Icarus team and inspired by the distinct history of their own club.

FC Samartex emphasized the importance of staying true to their roots within the design, and to reflect this, the club’s home kit incorporates a tree-like pattern atop a green and black colored jersey, in reference to their founding by workers at the Samartex Timber & Plywood Company.

The club, also known as the TImber Giants, further honors its heritage through its orange and white kit, which displays the club’s name proudly across a backdrop of trees.

Due to the international nature of this partnership, Icarus will also provide a platform for fans outside of Ghana to purchase replica shirts from their website, icarusfc.com.

Local fans will be able to purchase replica shirts from the club directly and these shirts will be made from the exact same high-quality fabric as the shirts worn by the players and retailed on icarusfc.com.

When asked about the continued partnership with FC Samartex, Managing Director of Icarus Football UK, Jonny Hopcroft replied, “We absolutely loved working with FC Samartex last year and are so excited to watch the team compete in their inaugural season in the Ghanaian premier league this year.”