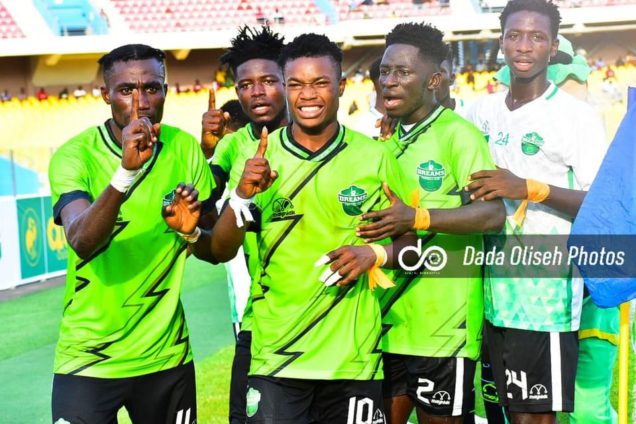 The matchday one of the 2021/2 Ghana Premier League continued on Sunday, having seen two matches already played on Friday and Saturday respectively to kick off the new season.

Accra Lions and Elmina Sharks played out a 1-1 draw at the Accra Sports Stadium in the fixture of the new season – the game also being the first ever top-flight match for the Lions.

Asante Kotoko left it late against Dreams FC, scoring three goals in the last six minutes of the game to seal a comeback win after going a goal down in the 64th minute.

Debutant Fatawu Issahaku scored for the Believers, while Isaac Oppong came from the bench to score and provide two assists to inspire Kotoko to victory.

On Sunday, reigning champions of Ghana’s top-flight, Accra Hearts of Oak failed to win yet another opening fixture in the league – making it five consecutive seasons without winning their first game. The Rainbow lads were held by Legon Cities at the Accra Sports Stadium, with goalkeeper, Eric Ofori Antwi clinching the Man of the Match award.

Gold Stars, making their maiden appearance in the competition, beat Berekum Chelsea 1-0 to record a historic victory. Kingsford Boafo scored the only goal of the game.

It was a good week for debutants on Sunday as well, with Emmanuel Gyamfi scoring his first goal for Aduana Stars in their exciting game against Karela United at the Crosby Awuah Memorial Park. The former Kotoko winger’s opener was cancelled out by Hafiz Dogo to ensure a stalemate in Anyinase.

Zubeiru Ibrahim proved to be the difference maker at the Baba Yara Sports Stadium as King Faisal saw off competition from WAFA to win with a 1-0 scoreline.

Bechem United were the heavy winners in Sunday’s 3pm matches, scoring four unanswered goals against Medeama at the Nana Gyeabour Park in Bechem. Augistine Okrah scored and assisted in the clash while Francis Twene and Emmanuel Aveyor were also on the scoresheet. Aveyor scored twice in the game.

Eric Esso also scored in the game involving Techiman Eleven Wonders and AshantiGold, as the Obuasi-based picked their first three points of the 2021/22 campaign.

The first gameweek ended with Real Tamale United snatching a point late in the game through a penalty by David Abagna. Olympics took the lead earlier through Raymond Oko Grippman.