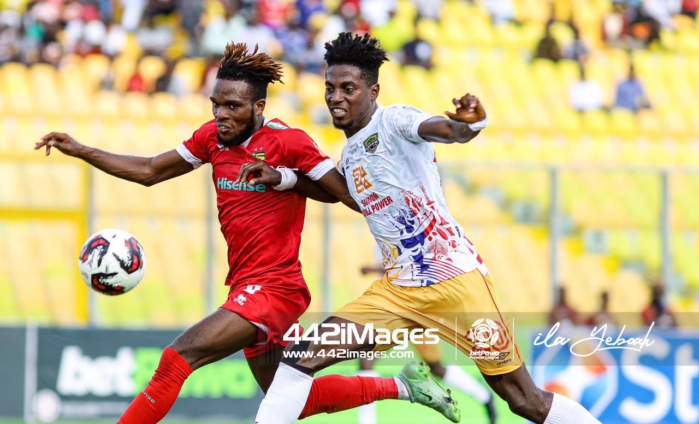 Eight games have been played over the weekend in round three of the 2022/23 betPawa Premier League.

Caleb Amankwah scored late to rescue Hearts of Oak from defeat at Asante Kotoko while Legon Cities secured another win in Tamale, this time, against Real Tamale United (RTU). The Royals were also 1-0 winners over Tamale City a week earlier.

Berekum Chelsea and Medema will wrap up the week three fixtures on Monday at the Nana Agyeman Badu I Stadium.

Here’s a wrap of the week three games:

Accra Lions kicked off the round with a 1-0 win over newcomers Tamale City at the Accra Sports Stadium on Friday to make it back-to-back wins after an opening day defeat to Kotoku Royals.

Captain Dominic Nsobila scored the only goal of the game from distance nine minutes into the game. Accra Lions sit fourth with 6 points while Tamale City are 17th after three straight defeats.

Yaw Preko’s side continued their unbeaten run in the season after handing King Faisal their third defeat of the season in three games at the Accra Sports Stadium on Saturday.

Emmanuel Mensah squeezed in the winner for the Dade boys five minutes after the hour mark from close-range.

Emmanuel Agyemang Badu was adjudged the man-of-the-match in this encounter.

Great Olympics are second on the league log with Aduana FC. Both teams are on seven points. Meanwhile, King Faisal are bottom of the table with no point.

Hearts of Oak rallied from a goal down to draw 1-1 at the Baba Yara Sports Stadium in the Super Clash.

The draw leaves the Phobians in 13th with two points, just above Asante Kotoko, who have only played their first league game of the campaign. Read the detailed match report here.

The Pride and Passion lads brought to an end Dreams FC’s perfect start to the season at the Crosby Awuah Memorial Park on Sunday.

Nasiru Moro scored the only goal of the encounter to hand Maxwel Konadu’s side back-to-back wins in Tamale in two weeks. The victory over RTU on Sunday follows another 1-0 win over Tamale City a week earlier.

David Abagna Sandan, for the second time this season, had a penalty saved. He missed one in RTU’s league opener against Samartex.

The Royals are sixth on the standings with six points while the Northern Blues sit 15th with just a point.

Michael Enu scored for Michael Osei’s side at the Dun’s Park in Bibiani as they secured their first points of the campaign. The hosts missed a penalty to have won by two goals against the Hunters.

Bibiani GoldStars are 12th on the table. Bechem United, winless after two games, are 16th – with an outstanding game against Asante Kotoko in hand.

Annor Walker’s men took a two-goal lead in the first-half courtesy of goals from Emmanuel Keyekeh and Seidu Abubakar before Sam Adams and Kwame Adom Frimpong levelled for the hosts in Dormaa.

The draw means the Ogya boys are top of the league table with seven points. Samartex sit 11th with three points from three games.

DISCLAIMER: The Views, Comments, Opinions, Contributions and Statements made by Readers and Contributors on this platform do not necessarily represent the views or policy of Multimedia Group Limited.
Tags:
Asante Kotoko
Ghana Premier League
Hearts of Oak