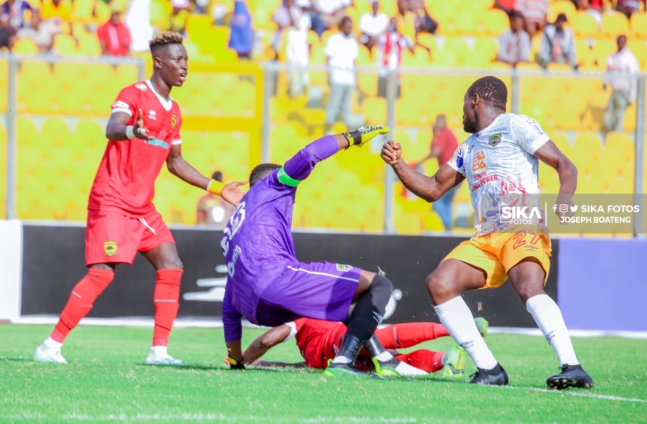 The first Super Clash of the 2022/23 betPawa Premier League season ended in a stalemate at the Baba Yara Stadium on Sunday, September 25.

Caleb Amankwah scored late in the game to secure a point for Hearts of Oak and ensure the Phobians avoid a second defeat this season.

Asante Kotoko were the better side in the first half of the game as they created loads of chances to go ahead but the forwards could not utilise the opportunities that came their way.

10 minutes after recess, the home team found the back of the net through centre-back, Yusif Mubarik. The defender was the closest to hitting into the net after the ball had come off the goalpost from a Kotoko set-piece.

Kotoko should have scored more goals as the game continued with Steve Mukwala and Isaac Oppong all being put through on goal.

But just like the opening half, there were unable to convert the chances, keeping Hearts in the game.

Then with just a little over four minutes to go, the Rainbow club found their equaliser through Caleb Amankwah.

The versatile player reacted the quickest from a cross near the penalty area and headed past Danlad Ibrahim in goal for Kotoko.

Both teams were not able to add to the score in the four minutes of time added on as the game ended 1-1.

The fixture was Kotoko’s first game in the Premier League this season and Hearts’ third of the campaign, having lost and drawn their opening two.

DISCLAIMER: The Views, Comments, Opinions, Contributions and Statements made by Readers and Contributors on this platform do not necessarily represent the views or policy of Multimedia Group Limited.
Tags:
Asante Kotoko
betPawa Premier League
Hearts of Oak
Super Clash