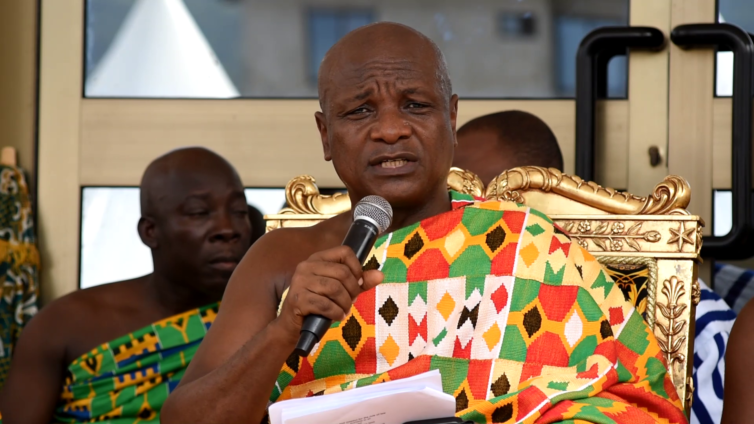 The Agbogbemfia of the Asogli State, Togbe Afede XIV has identified ‘greed-inspired corruption’ as the major challenge to Ghana’s development.

He indicated that the West African country loses so much money, which could have been channeled to development.

This, the traditional leader believes, has plunged the country into hardship and suffering.

Speaking at the maiden edition of the Asogli Anti Corruption Day Celebration in Ho, Togbe Afede, asserted that Ghana can only witness the desired development when it fights corruption head-on.

“Corrupt officials are termites of the woodwork, eating the very foundation of our progress so that is what we have to deal with”, he said.

He expressed dismay at the economic starvation and poor state of the African continent which holds 30% of the world’s mineral resources, 60% of arable land and harbors 17% of the world’s population but accounts for less than 3% of global GDP and global trade.

Togbe Afede quizzed why Africans are grappling with hunger and poverty, though the continent has so many mineral resources at its disposal.

“So our people are suffering very low standard of living that they don’t have to. God has given us so much”, he said.

He disclosed that he identified the vulnerability of the continent when African countries had to rely on external aid to deal with the impact of the coronavirus pandemic.

“I am worried that as a country, we didn’t have that capacity to deal with the impact of corona by ourselves and then I realized how vulnerable we are as a country, and not only Ghana but the whole of Africa”, he detailed.

Togbe Afede said the underdeveloped state of Ghana depicts that the leaders had failed forebears and framers of the 1992 Constitution – which enjoins the government to create enabling environment for development and enhance the living conditions of the citizenry.

He shared the pain of the underprivileged citizens who are compelled to deal with the hardship being experienced in the country.

He chronicled how he struggled to access education due to the impoverished lifestyle of his family, hence have a fair idea of what the suffering Ghanaian is going through.

“We have not lived up to the expectations of our founding fathers or framers of the constitution. The fact of the matter is that our people are suffering and I feel their pain because I have been there before, I know what poverty is,” he said.

The Former House of Chiefs President blamed increasing inflation and the depreciating state of the Ghana Cedi against major currencies on the failure of the leaders of the country.

He added that the indicators reflect the country’s economy is in a worsening state.

“If we had not done the re-domination of the Cedi, in 2007, we would have been exchanging 100,000 Cedis, now for the US Dollar. That is how far our currency has lost value.

“Which means that we have not been very good at managing our own affairs. We have not met the expectations of our founding fathers”, he said.

Togbe Afede lamented the inability of youth to get well-paid jobs after several years of graduating, adding that the high level of graduate unemployment threatens the security of the country.

He said that unemployed youth may resort to crime out of frustration to make ends meet, while others migrate through bizarre conditions to other parts of the world to seek better-promising situations.

He lamented how some Ghanaian migrants had to endure Xenophobic acts, and dehumanizing treatments in other countries because their motherland has failed to provide them with conditions that would guarantee good standards of living.

He attributed the country’s current economic hardship to increasing acts of corruption.

“I have reflected further on all of this as somebody who has done some economics and who has been in business for some time, looking at all the factors mitigating against our development and came to a conclusion that the most important of all of these is corruption. Greed-inspired or greed-fueled corruption “, he stated.

DISCLAIMER: The Views, Comments, Opinions, Contributions and Statements made by Readers and Contributors on this platform do not necessarily represent the views or policy of Multimedia Group Limited.
Tags:
Asogli State Council
Togbe Afede XIV
Volta Region