GreenFaith launches a multi-faith, multi-stakeholder campaign to keep fossil fuels in the ground in Ghana 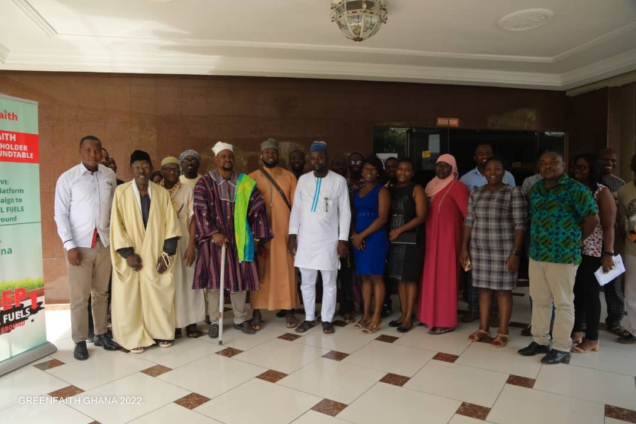 Faith leaders in Ghana have agreed to use their influence to push for faster universal access to renewable energy while also preaching the abolition of deforestation.

This was the overarching message at a GreenFaith roundtable in Ghana, where stakeholders called for increased awareness and the halting of new fossil fuel projects in Africa.

“We appreciate commitment by our partners in Ghana to start these series of conversations that will see the country’s plan for a 100 per cent just transition to renewable energy expedited under the multifaith and multistakeholder campaign to keep fossil fuels in the ground,” said GreenFaith’s Director of Organizing Meryne Warah.

Green Faith, according to Meryne, envisions a movement in which leaders can take their rightful place in the community and lead actions.

According to experts, pollution from fossil fuel-fueled development in the global North is to blame for global warming, which has resulted in extreme weather events that have claimed human lives and property.

Africa has suffered the brunt of climate change even though it is responsible for only nearly 4 percent of the global carbon emission.

At a meeting in Accra, faith leader Alhaji Uthman Raji Abubakar stated that a lack of political will is impeding a faster transition to renewable energy.

“If we listen without interrogating what they (politicians) say because we call them leaders, it puts us in problems. Not all leaders are good. Some go into leadership with interests,” he said.

Others opined that extraction from crude oil has been going on in Ghana for years, but without benefiting the people.

“We still see a lot of fuel companies as credible although a lot of harm to the environment is caused by them. Illegal location of fuel stations in Ghana has destroyed the environment.”

He said, more and more religious people are concerned about climate change, but they are silent because they do not know how to relay the information in a way that will not jeopardize their religion.

In the spirit of leaving no one behind, the faiths community is constructing a resilient grassroots multifaith movement.

Several other speakers emphasized the importance of faith leaders taking their rightful place in the community, acknowledging that more religious people are concerned about climate change.

Sheikh Abudulai further said, religious leaders are the direct link to the grassroots and therefore need to understand the dynamics of these communities and the impacts of extraction activities on their lives.”

Some speakers at the meeting said a mind reset was necessary among intellectuals and political leaders.

“Empowering women and young people with knowledge can help in the adaptation process. We as spiritual leaders have a lot of influence on the lives of our followers. A lot of the time women are the majority in our worship places. Influencing them makes advocacy easy,” said Elvis Oppong Mensah, the Program Officer, Forest Governance and Climate Change, Ghana.

Recognizing the stated realities, religious leaders, the event’s stakeholders, vowed to use their influence more to enlighten their followers on proper action as well as what they should ask of their government in regard to a 100% transition to renewable energy.

The meeting, which included GreenFaith Circle leaders, multi-faith religious leaders, civil society partner organizations, and other community leaders, resulted in the creation of a “Keep It In The Ground Ghana (KIITGG) campaign and a related messaging strategy aimed at fossil fuel projects. They also identified training requirements and devised plans to address them.

DISCLAIMER: The Views, Comments, Opinions, Contributions and Statements made by Readers and Contributors on this platform do not necessarily represent the views or policy of Multimedia Group Limited.
Tags:
Climate change
Fossil
GreenFaith