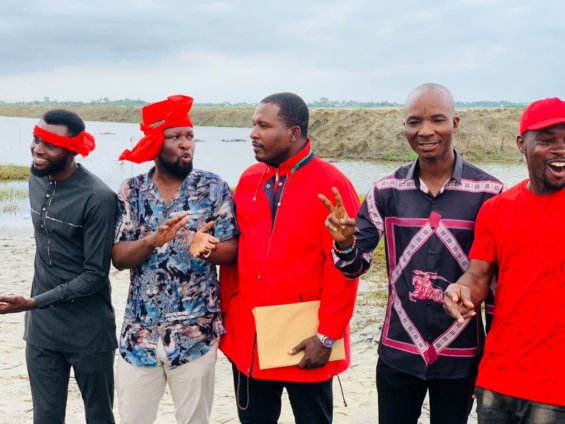 Some concerned youth in the Ketu South Municipality are calling on government to halt the activities of the Seven Seas salt company operating in Agorko, Adafienu, Hedzranawo and across Denu-Tokor.

At a press conference held in Laklevikope near Denu, where a woman and her three children lost their lives, the residents said the company was only given a permit to work in Adina.

According to the residents, the operations of the company have caused havoc in the Municipality.

They noted that, not less than 10 people have lost their lives in 2022 in the dykes allegedly owned by the company.

“It is clear that the Municipal Assembly had evidence pointing to the fact that Seven Seas Salt Ltd had no license to do the expansion it was illegally carrying out and there was no environmental impact assessment carried out by the company and submitted to EPA for approval,” they said.

They added that, there was a letter instructing the company to fix the fishing traps of residents that were destroyed in the process of their expansion in order to maintain the peace in the Municipality.

However, this directive was not adhered to.

Also, there was no public sensitization in the various communities about the expansion projects undertaken by the company.

The residents noted that the community members wrote letters to the EPA and the Minerals Commission seeking clarifications on the licenses and operations of the Seven Seas Company dated 24th March 2021.

16 members of the communities affected by the operations of the company also wrote to the Minerals Commission referencing an earlier letter written to the Ketu South Assembly.

They said the communities earlier rejected the establishment of the company in the wetlands that served as a livelihood for the people with a letter which detailed all the anticipated havoc and damage the company will have on the people, and the environment.

“Lo and behold, today we are here talking about the numerous deaths that have occurred due to the negligence of this company. The recent death includes three young children and their mother who lost their lives at Laklevikope where we are currently having our press conference through drowning in one of the deep dykes created by the company,” they said.

According to the youth, the operation of the Seven Seas Company is an affront to the laws of Ghana and a threat to the lives of the residents, hence the urgent need to halt their activities beyond its official site, Adina.

“We see this company operating with impunity and killing our people with their shoulders and heads held high. This fight is not borne out of malice but one that everyone should support because it threatens our very existence as a people,” they said.

The residents have also accused some of their chiefs of being compromised by the company with huge sums of money.

“Documents available to us indicates that some of our Chiefs have been compromised by this company because they were given huge sums of money and per the laws of Ghana, all wet lands are owned and entrusted to the state.

“How come Seven Seas paid the chiefs of some traditional areas a huge sum of over GHC540,000 for the lands owned by the Amu Gade Family on which the company was doing its expansions without the prior and express license of the Minerals Commission and the Environmental Protection Agency?” they said.

Meanwhile, residents are set to demonstrate against the company on Tuesday, 27th September 2022, to drum home their grievances.

In a phone interview with the MCE for Ketu South, Maxwell Lukudor, he said a committee has been set up to investigate the issues that led to the death of the family of 4.

Mr Maxwell Lukudor noted that it was necessary for his outfit and the security agencies to meet and deliberate on the issue.

DISCLAIMER: The Views, Comments, Opinions, Contributions and Statements made by Readers and Contributors on this platform do not necessarily represent the views or policy of Multimedia Group Limited.
Tags:
Ketu South
Seven Seas Company Ltd