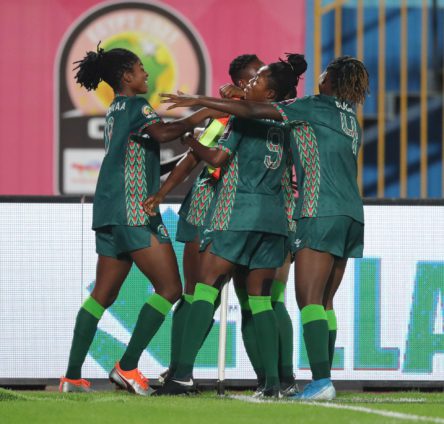 Evelyn Badu turned in a woman of the match performance as Hasaacas Ladies rallied to a 3-1 win over Equatorial Guinean counterparts, Malabo Kings FC.

Evelyn Badu put Hasaacas ahead with a cool finish – a low drive into the bottom corner of Malabo’s net in the 11th minute.

The first goal scored by a Ghanaian and a Ghanaian team in the CAF Women’s Champions League.

Hasaacas navigated the rest of the first half without any challenges and oozed class on the pitch.

The second half resumed with the same characteristics as the first, with Yusif Basigi’s team taking the game to Malabo Kings.

In the 86th minute, Perpetual Agyekum dropped jaws when she doubled Hasaacas’ lead with a direct freekick.

The goal summed up the night for Hasaacas – one filled with magic.

Some few moments later, Malabo halved the deficit from a corner kick. With the game nearing its end, Malabo harboured intentions of staging a dramatic comeback.

However in the 92nd minute, Badu dispatched such ideas, coolly placing the ball in Malabo’s net to seal Hasaacas’ victory.

She made history, becoming the first player to score a brace in the competition.

Up next for Hasaacas is Mali’s AS Mande on November 8.