Having difficulties navigating your locality? KNUST develops myTroski app; it speaks twi, too 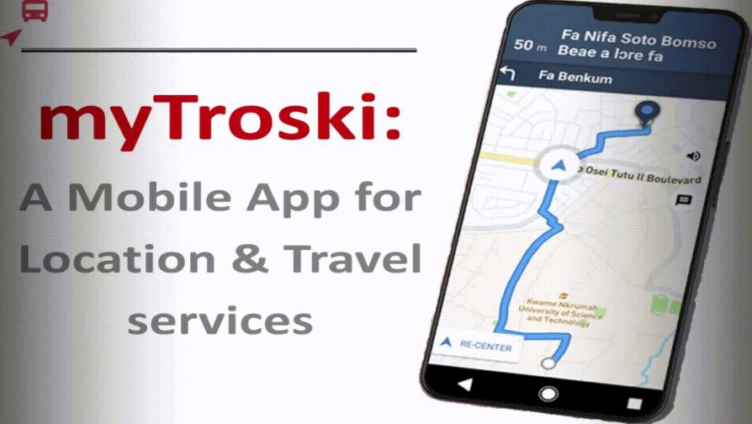 Finding addresses and locations in Western countries is easy using the Google Map.

However, poor road layout and informal settlements, especially in sub Saharan Africa, make it difficult to do same.

Fortunately, the problem is being addressed with the myTroski app developed by the Kwame Nkrumah University of Science and Technology.

With the lack of mapping for a lot of areas, including schools, markets and hospitals in Ghana, many residents resort to the use of informal names.

KNUST Researchers therefore took advantage of address points of landmarks in local communities and trotro services to generate data for the app’s development.

The app, a joint project between the College of Humanities and Social Sciences and the Regional Transport Research and Education Centre Kumasi (TRECK) uses a digital map to locate and reach areas in the locality.

“You can visualize places and explore information about services in your locality such as bus terminals spots etc,” project lead, Dr. Gift Dumedah of the Department of Geography and Rural Development said.

Apart from the English language, the app has incorporated the Twi language for users who are not familiar with the former.

The app, for now, has been developed for only the Oforikrom Municipality, but will soon be available in other parts of the country.

The app was developed with an amount of 30,000 cedis from the KNUST Research Fund (KReF).

The app, which can be downloaded via the app’s website mytroski-gh.com or the Google Playstore, can also be used without the internet.

The researchers say they will soon release the iOS version.

DISCLAIMER: The Views, Comments, Opinions, Contributions and Statements made by Readers and Contributors on this platform do not necessarily represent the views or policy of Multimedia Group Limited.
Tags:
Kwame Nkrumah University of Science and Technology
myTroski app