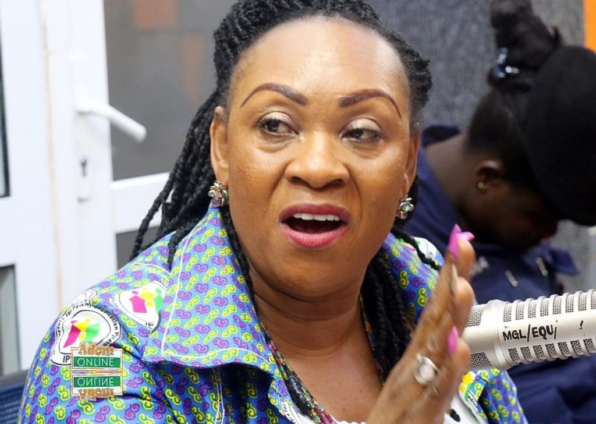 A security analyst has described the firing of a gun by Minister for Special Development Initiatives at a voter registration centre as political vigilantism.

Col (retd) Festus Aboagye said her actions are illegal under the Vigilantism and Related Offences Act passed in 2019.

“Her behaviour was a threat. The use of violence to intimidate her political opponents and the idea that she has organised herself as a member of a political party, as a leader to undertake those activities falls squarely in the provision of Act999” he said.

Speaking to News Desk Host Ernest Kojo Manu on the JoyNews Channel Tuesday, Mr Aboagye indicated that Madam Koomson’s actions and subsequent explanations are undeserving of a Minister of State.

He added that the incumbent Awutu-Senya MP’s behaviour has caused financial loss to the state and she must be arrested and prosecuted.

Col (retd) Aboagye also joined calls for President Akufo-Addo to sack her as her actions have the potential of undermining national security.

The Special Development and Initiatives Minister admitted to firing gunshots at the Step to Christ centre in her constituency during the ongoing voter registration exercise on Monday.

She also justified the decision to carry a firearm to the area as a means of personal protection.

The disturbances caused the officials of the Electoral Commission to shut down the centre and run for their lives.

The security analyst said, “The fact that she did not inform the EC which has primary responsibility for the integrity of the process and the police that has the mandate to enforce law and order suggests that she has become the Constituency Chief law enforcement officer.

“The honourable thing to do is to take responsibility and apologise and not try to explain your actions.”

The incident Col (retd) Aboagye revealed has heightened the state of fear in the country as the draws close to the general elections.