He is fit for training, not for matches - Ajax cast doubts on Kudus Mohammed's availability for AFCON - MyJoyOnline.com

He is fit for training, not for matches – Ajax cast doubts on Kudus Mohammed’s availability for AFCON 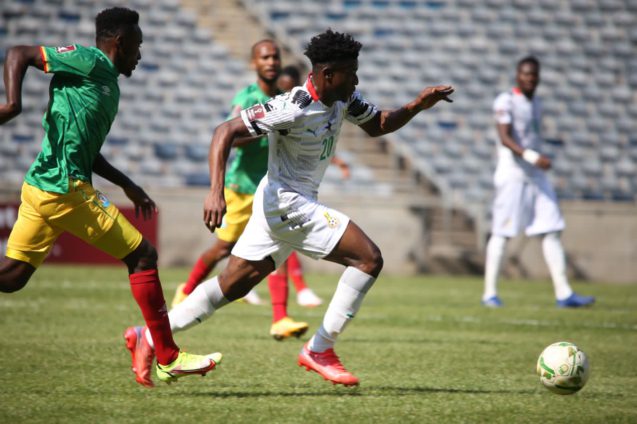 Ajax Amsterdam has cast doubts on the availability of Kudus Mohammed for Ghana in the ongoing Africa Cup of Nations (AFCON) in Cameroon, JoySports can report.

“Since he (Kudus) came to Amsterdam he has faced several serious injuries. Both Ajax and Mohammed are really careful with every new step on his way back,” portion of an email from Ajax to JoySports reads.

In the course of the tournament, Black Stars head coach, Milovan Rajevac in his pre-match press conference ahead of Ghana’s second Group C game against Gabon revealed he expects the youngster to join his team ‘soon.’

“We are not sure about Kudus but we expect to see him soon, he is recovering and training so hopefully we see him soon,” he said.

The hopes of Milovan Rajevac and the Ghana FA appear to have dashed as the Dutch-based club tells JoySports “Mohmmed Kudus is in Amsterdam, working hard every day to recover.”

The club added that “he hasn’t been part of our match squad for months”.

The club continued that, the former Ghana U17 star has not been lucky with injuries, saying “since he came to Amsterdam he has faced several serious injuries which has influenced their decisions on the player.

“Both Ajax and Mohammed [Kudus] are really careful with every new step on his way back,” the club stated.

Recently, videos on Ajax’s social media showed Kudus training with the team in Portugal in their mid-season tour.

The Dutch champions confirmed he has been training with the first team, but noted a difference between fitness for training and that of matches.

These days he joins parts of our first team’s training sessions on the pitch. Sometimes he even completes these team sessions. But there is a big difference between being fit for training sessions and being able to play full matches, that takes more time.

“Especially in his situation with the history mentioned before,” the email concluded.

The content of Ajax’s email to JoySports, though not explicit on his availability or otherwise, appears to suggest Kudus might not be available even if the Black Stars progresses to the next phase of the AFCON 2021 tournament.