Hearts of Oak watch on as Kotoko lift title after drawing goalless - MyJoyOnline.com 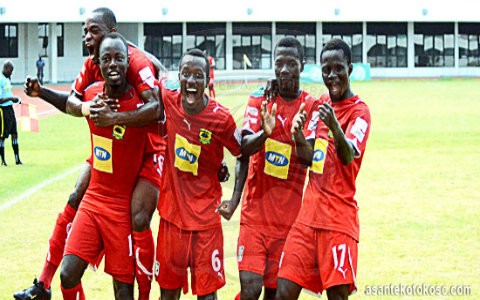 The 'Super Clash' produced enough energy but lacked goals as Asante Kotoko and Hearts of Oak shared the spoils at the Baba Yara Stadium on Sunday.

Despite the barren scoreline, players of Kotoko mounted the podium to lift the First Capital Plus title with players picking their winners medals.

Both sides came close to scoring with Abeiku Ainooson clearing off the line an attempt by Hearts of Oak in the closing stages.

Hearts of Oak goalkeeper Tetteh Lugard was in fine form as he managed to keep Kotoko's efforts out in both halves.

And the title celebration was Kotoko's third-straight in the last three seasons as they return to the CAF Champions League.

For the Phobians, the point earned could help them secure the second qualifying slot for the elite continental club competition after their close contenders, Heart of Lions lost at home.