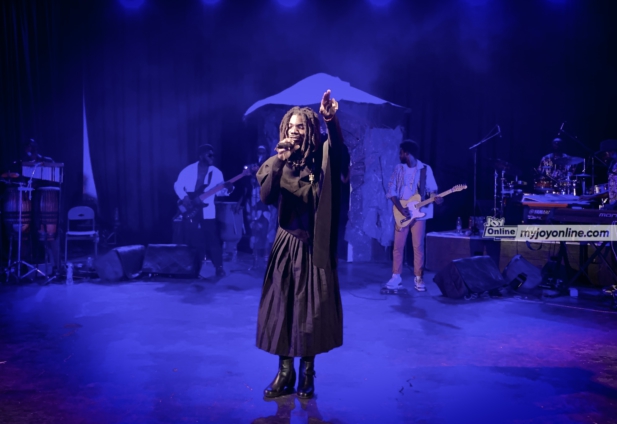 For anyone who has imagined how the cinematic feel of his latest album ‘Nyame Mma‘ would look like, Saturday night was it.

Rarely do enthusiasts experience a display of indigenously well-knitted culture on display in recent times.

The Nyame Mma album, since its release in 2021, has been described by critics as one of the most authentic bodies of work so far.

On November 26, Pure Akan demonstrated the depth of the critically acclaimed project in its raw and visual form.

Aside from the music, it was an all-around art interspersed with plays and spoken word performances.

The rich nature of the display by Kwa Appiah, as he is affectionately called, cannot be overemphasised.

Traditional values and historical lessons were shared in varied ways of art.

He also assembled collaborators and colleagues who also thrilled the fans with good music.

Some of the supporting acts were Efya, Worlasi, King Ayisoba, Sekyerewaa, Ayisi, Deydzi among others.

The ambiance was eclectic and the Senku Live band did not disappoint.

@PureAkan was so good on Saturday, Ayisi just had to stand and admire greatness.
🔥🔥🔥 pic.twitter.com/ajvcufINuF

The attendees were on their feet for the most part of the night singing and dancing.

There was also merchandise being sold alongside where patrons collected some Nyame Mma paraphernalia.

saturday was a night with NYAME MMA. and it was truly divine.

By the end of the show, patrons left the venue with the feeling of a night well spent.

DISCLAIMER: The Views, Comments, Opinions, Contributions and Statements made by Readers and Contributors on this platform do not necessarily represent the views or policy of Multimedia Group Limited.
Tags:
concert
Nyame Mma experience
Pure Akan