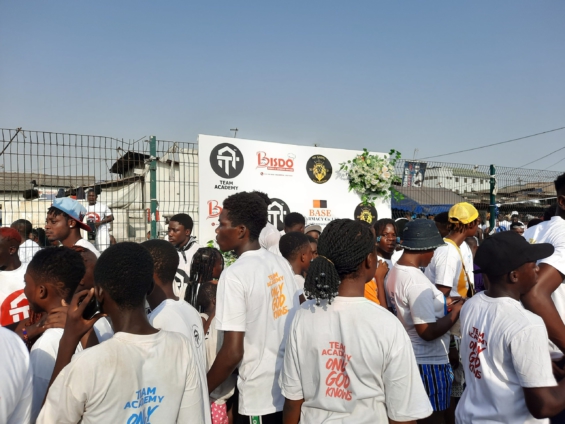 HN Sarpei Foundation partnered with the 2022 edition of the Peace and Unity walk by the youth group, Team Academy in Ga Mashie, Accra.

The second edition of the annual walk was hosted to unite residents of the communities for the common good.

It was also aimed at championing peaceful co-existence and raising awareness on community development.

The event was held on Boxing Day, Monday, December 26, 2022, under the theme, ‘Harnessing the power of youth voices in creating a better future’.

It brought together hundreds of people as they marched through the Ga Mashie areas from the Ussher Fort in Bukom, through to Korle Gonna, Korle Bu, Mamprobi, Chorkor, James Town and its environs with the Bukom Park marking the final converging point for a community gathering.

This was a local way to imbibe the spirit of youth and community cohesion and underscore the need for residents to be agents of change despite their differences.

The indigenes were admonished to shun divisive acts that retard the socio-economic transformation in the communities and rather bear in mind, the importance of living in harmony.

HN Sarpei Foundation joined in the walk as part of its broad aim of putting the core values of youth and community engagement into action in the underserved communities it prioritizes.

Hans, who plays for FC Ingolstadt in Germany is much committed to giving back to the community he was raised.

“This is not only to have fun but as the saying goes, unity is strength. HN Sarpei Foundation will be collaborating with Team Academy, the organizers to promote peace and togetherness to ensure that our local communities develop. We are happy to be supporting this annual cause going forward,” Mr Sarpei emphasized.

The peace and unity walk attracted traditional and political leaders and a host of other dignitaries.

DISCLAIMER: The Views, Comments, Opinions, Contributions and Statements made by Readers and Contributors on this platform do not necessarily represent the views or policy of Multimedia Group Limited.
Tags:
Hans Nunoo Sarpei
HN Sarpei Foundation