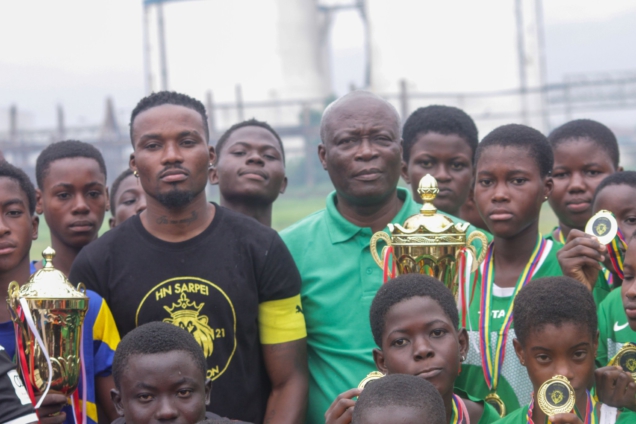 The donation, which was made through his foundation, Hans Nunoo Sarpei Foundation, was to empower the pupils through education and football.

The donations included 20 boxes of pens, boxes of pencils and erasers, and Puma playing shoes to the pupils.

The HN Sarpei Foundation held a football tournament at the Ghana National Fire Service Training School Park in Jamestown, as part of the event, where male and female teams from eight schools battled for the top prize.

The boys’ competition was won by Wisdom Preparatory School, who defeated Adedeinkpo 1 & 2 Primary School 5-1 in the final.

The girls’ football contest was won by Wisdom Preparatory School after they again beat Adedeinkpo 1 &2 Primary School 4-3 on penalties.

The winning teams were presented with a colossal trophy, while the top players in both the boys’ and girls’ competitions received Puma playing shoes.

Some of the dignitaries present at the event were the Member of Parliament for Odododiodio Constituency, Nii Lante Vanderpuye, the Deputy German Ambassador to Ghana, Mr Helge Sander and the general secretary of the professional footballers Association of Ghana (PFAG), Anthony Baffoe.

Former coach of Liberty Professionals, Reginald Asante (Reggae), was also present and presented the medals to the various winners.

The HN Sarpei Foundation is involved in community empowerment, community engagements and supporting the less-privileged in tertiary education.

DISCLAIMER: The Views, Comments, Opinions, Contributions and Statements made by Readers and Contributors on this platform do not necessarily represent the views or policy of Multimedia Group Limited.
Tags:
FC Ingolstadt
Hans Nunoo Sarpei
HN Sarpei Foundation
Jamestown