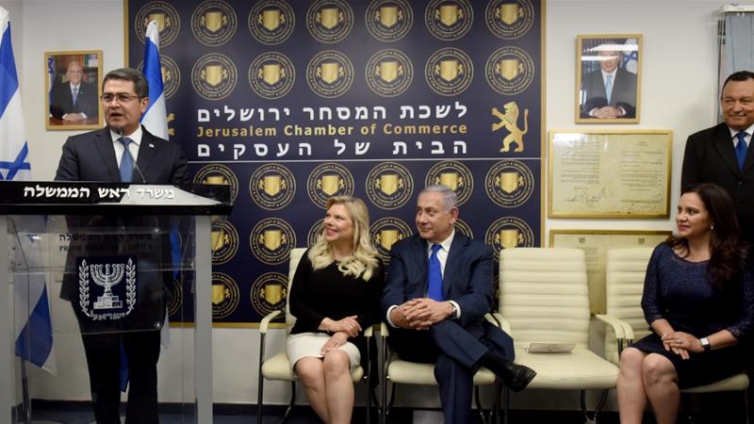 Hernandez opened a commercial office in Jerusalem in September 2019 as an extension of the Honduran embassy in Tel Aviv [File: Debbie Hill/Pool/Reuters]

Honduras hopes to relocate its embassy from Tel Aviv to Jerusalem before the end of the year, putting an end to its policy of neutrality – a move likely to further anger the Palestinians.

“I have just talked to Prime Minister Netanyahu to strengthen our strategic alliance, we spoke to arrange the opening of the embassies in Tegucigalpa and Jerusalem, respectively,” Honduran President Juan Orlando Hernandez posted on Twitter on Sunday.

“We hope to take this historic step before the end of the year, as long as the pandemic allows it.”

Netanyahu said the intention was to open and inaugurate the embassies before the end of the year. Israel currently has no embassy in Honduras but opened a diplomatic office there last month.

Prime Minister Benjamin Netanyahu and President Juan Orlando Hernandez spoke on 20 September 2020, and reaffirmed that Honduras and Israel are close friends and strategic allies who form part of an alliance of reciprocal support and both economic and political cooperation. pic.twitter.com/c9V4Gla3Ch

Hernandez last year began a process of breaking with his country’s long-held policy of neutrality on the Israeli-Palestinian conflict.

Hernandez opened a commercial office in Jerusalem in September 2019 as an extension of the Honduran embassy in Tel Aviv.

“Honduras recognises Jerusalem as the capital of Israel and we are confident that this recognition will be of great blessing and mutual benefit,” Hernandez said last month.

Honduras has the second-largest population of Palestinians in Latin America, after Chile.

Only two countries – the United States and Guatemala – have established embassies to Israel in Jerusalem.

The Honduran statement followed announcements by US President Donald Trump and Netanyahu this month who said Kosovo and Serbia would also open embassies in Jerusalem.

The status of Jerusalem has been one of the thorniest issues in the decades-old Israeli-Palestinian conflict.

The Palestinians want occupied East Jerusalem, which includes the holy sites in the Old City and was captured by Israel in the 1967 war, as the capital of a future state.

Israel regards the entire city as its capital – a claim not recognised by the international community.

Most diplomatic missions to Israel have been in Tel Aviv as countries stayed neutral over the disputed city of Jerusalem until its status could be settled in an Israeli-Palestinian peace deal.

But in December 2017, Trump recognised Jerusalem as Israel’s capital and announced the moving of the US embassy from Tel Aviv.

The US-brokered deals between Israel and the Gulf states, forged partly through shared fears of Iran, has left the Palestinians further isolated in the region.