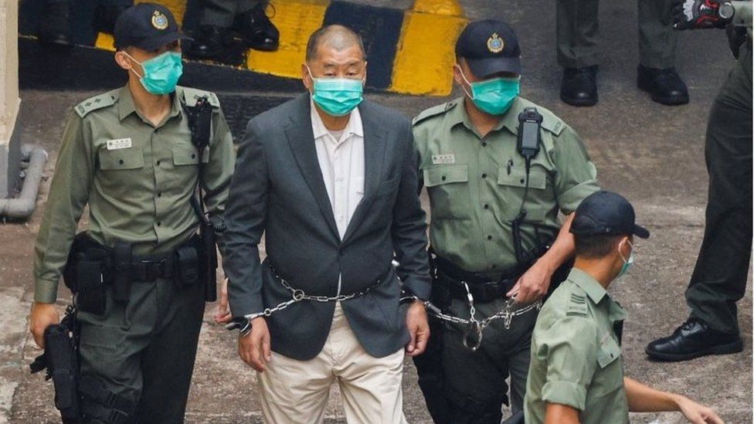 The founder of Apple Daily newspaper is a fierce critic of China’s authorities.

He is accused of fraud and conspiring with foreign forces, and could spend years in jail if convicted.

Beijing has said the new security law will return stability to the territory after a year of unrest, but critics say it is aimed at silencing dissent.

Judge Alex Lee set a number of other conditions for bail, including Mr Lai having to remain at home, surrender all travel documents and hold no meetings with foreign officials or foreign institutions deemed to be hostile to China.

Mr Lai has also been banned from posting on social media, issuing statements or speaking to the media.

Mr Lai was charged under the security law on 11 December. However, he has been in custody since 2 December, after being denied bail on a separate charge of fraud related to the lease of a building that houses the newspaper.

His legal team appealed against the denial of bail, leading to Wednesday’s hearing. Both the security law and fraud cases in which he is charged are set to return to court in April.

One of the city’s most prominent supporters of the pro-democracy movement, Mr Lai is estimated to be worth more than $1bn (£766m).

Having made his initial fortune in the clothing industry, he later ventured into media and founded Next Digital, the parent company of Apple Daily – a tabloid that is critical of the mainland Chinese leadership.

In a local media landscape increasingly fearful of Beijing, Mr Lai is a persistent thorn for China – both through his publications and writing that openly criticises the Chinese leadership.

It has seen him become a hero for many residents in Hong Kong. But on the mainland he is viewed as a “traitor” who threatens Chinese national security.

DISCLAIMER: The Views, Comments, Opinions, Contributions and Statements made by Readers and Contributors on this platform do not necessarily represent the views or policy of Multimedia Group Limited.
Tags:
Hong Kong
Jimmy Lai