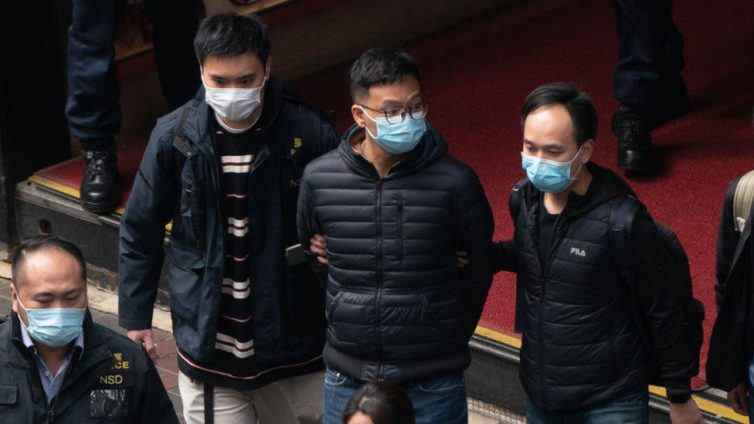 Patrick Lam was among those arrested by police

Both current and former staff members of Stand News were among those targeted.

More than 200 police officers were also sent to raid the publication’s office.

Police said in a statement that they were authorised to “search and seize relevant journalistic materials”.

Those arrested – three men and three women – are aged between 34 and 73 years old.

They include the former and acting chief editors of Stand News Chung Pui-kuen and Patrick Lam, as well as pop star turned democracy icon Denise Ho, who was a former board member.

Other board members Margaret Ng, Christine Fang, and Chow Tat-chi were also among those arrested.

Mr Chan was not arrested but he was taken in for questioning by police.

The night before, Mr Chan had hosted the annual dinner of the Hong Kong Journalists Association (HKJA), of which he is the chairperson. In a speech, he referenced the closure of Apple Daily, saying that the incident had “shaken” Hong Kong.

He concluded by saying the city would “always need the truth and always need journalists …. no matter how difficult the road ahead is, the [Hong Kong Journalists Association] will not fall down”.

Earlier this year, hundreds of police raided the premises of the now-defunct Apple Daily – a publication known for being a vocal critic of the Hong Kong and Chinese leadership.

Its assets were frozen, executives were detained and the paper shut down soon after.

Its closure left Stand News as one of the last openly pro-democratic publications in the city. It was among a handful of relatively new online news portals that especially gained prominence during the 2019 pro-democracy protests.

Today’s arrests also come a day after media tycoon Jimmy Lai, the founder of Apple Daily, was slapped with the same charge even as he serves a jail sentence for a litany of separate charges against him.

Today’s arrests also come a day after media tycoon Jimmy Lai, the founder of Apple Daily, was slapped with the same charge even as he serves a jail sentence for a litany of separate charges against him.

‘Once a beacon of press freedom’

Today’s raid did not come as a surprise.

A few days after the closure of Apple Daily, Stand News announced they would be taking measures to lower their risks, including stopping donations from readers and the resignation of six of its directors.

One staff member who does not want to be named said today he felt calm as was expected.

“I hope everyone will be safe and press freedom is not a crime,” he said but didn’t want to respond when asked if he felt worried about his own safety and that of his 60 colleagues.

Hong Kong was once a beacon of press freedom in Asia, but now, one cannot help wondering which outlet might come next.

The Committee to Protect Journalists have condemned the arrests, with its Asia program coordinator Steven Butler calling them “an open assault on Hong Kong’s already tattered press freedom, as China steps up direct control over the former colony”.

Meanwhile, HKJA said in a statement that it was “deeply concerned” about Wednesday’s incident, and urged “the government to protect press freedom in accordance with the Basic Law.”

The Basic Law, which came into effect when Hong Kong was handed back to China from Britain, protects rights such as freedom of assembly and freedom of speech.

Hong Kong authorities have been increasingly cracking down on dissent in the city, following the imposition of national security law.

The controversial law criminalises secession, subversion and collusion with foreign forces, and carries a maximum sentence of life in prison.

Critics say the law effectively reduces Hong Kong’s judicial autonomy and made it easier to punish demonstrators and activists.