Honorary Consul of Indonesia in Ghana holds dinner for members of Indonesian community in Accra - MyJoyOnline.com 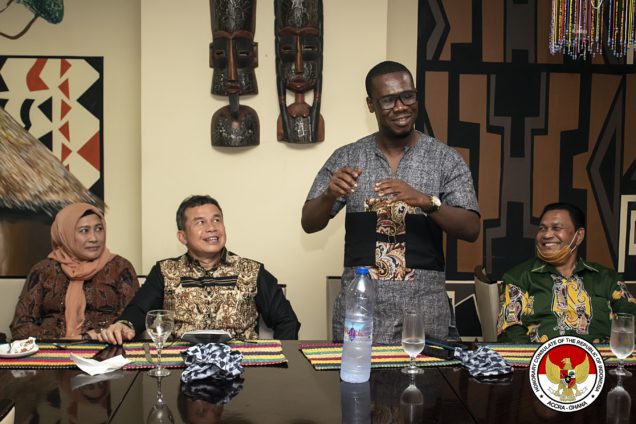 Honorary Consul of Indonesia in Ghana

Honorary Consul of the Republic of Indonesia in Ghana, Paskal A.B. Rois has held a dinner in honour of the members of the Indonesian community in Accra as part of his efforts to deepen the relationship between the Consulate and Indonesian nationals in the country.

More than thirty members mainly from Accra were in attendance in addition to one female missionary who travelled from the Northern Region.

The event was the first of its kind since the Consul assumed office in May, this year. The Special Guest of Honour was the Indonesian Ambassador to West Africa including Ghana, His Excellency, Dr. Usra Hendra Harahap and his wife, Mrs. Umrotien Zunaeny Sahroni

The Ambassador’s presence was unique as it coincided with the 34th-anniversary celebration of his holy matrimony.

Other members of the delegations included the Minister Counsellor, Mr. Fahmi Aris Innayah as well as Counsellor Mr. Ary Raharjo from the Indonesian Embassy in Abuja, Nigeria.

A three-member visiting delegation of Indonesian investors led by a former Governor of Aceh Province in Indonesia and current Member of Parliament (MP) for the province of Aceh in Indonesia, Honourable  Dr. Ir H. Abdullah Puteh, MSi was also present at the dinner.

Speaking at the event, Dr. Ir H. Abdullah Puteh, MSi lauded the Honorary Consul in Ghana for the good work being done, noting that he had seen a remarkable improvement in the operations of the Consulate in recent times as compared to the situation in the past.

The Ambassador congratulated members of the Indonesian community in Ghana for comporting themselves, adding that they should co-operate with the Honorary Consul in Accra in order to achieve a lot more for themselves, Ghana and Indonesia through the promotion of indigenous business opportunities in Ghana.

Ambassador Dr. Usra Hendra Harahap assured the Indonesian residents in the country that the government of Indonesia would do everything possible to support and protect them in all their endeavours.

He however reminded them that such a gesture is limited, adding that they should do all the due diligence there is in whatever business venture they intend to embark upon in the country.

On his 34th marriage anniversary message, Dr. Usra Hendra Harahap encouraged the youth to remain faithful, trustworthy and committed to their marriage or relationship journey, emphasizing that though such matrimonial journeys come with their own challenges, they are rewarding in the end.

The Honorary Indonesian Consul to the Republic of Ghana, Paskal A. B. Rois assured the members of the Indonesian community in Ghana as well as the investors that he would do everything possible to support their efforts at uniting and strengthening the existing ties between the two countries.

He also assured the Indonesian investors that Ghana has a positive enabling environment for investment in the agribusiness and its related sectors, adding that investing in the palm oil and rice sectors in particular and the agricultural sector, in general, would be very rewarding.

A former Governor of Indonesia and current Member of Parliament for the Province of Aceh in Indonesia, Dr. Ir H. Abdullah Puteh led the Indonesian investors’ delegation to the country. He described their visit as very positive, saying they are looking forward to greater opportunities to invest in the agribusiness sector of the Ghanaian economy.

Dr. Ir H. Abdullah also noted that Ghana has become a strategic place for investment in the West African sub-region.

He, therefore, stressed the need for Indonesia to take advantage of such an opportunity to invest in Ghana so as to enable the country to become the gateway to the African continent.