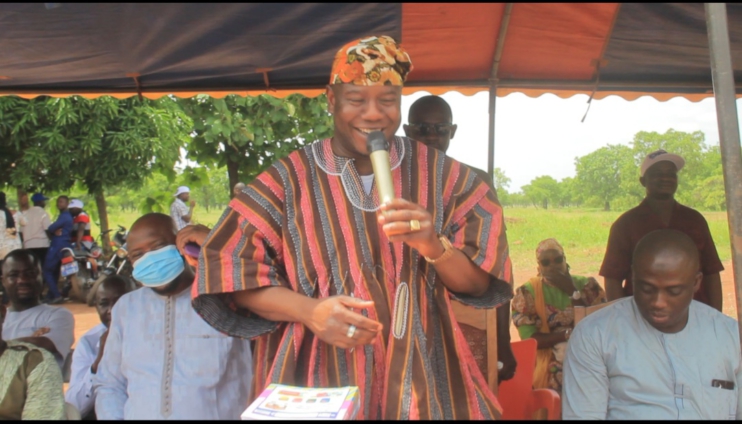 Member of Parliament for Yendi in the Northern region has called on the Trade and Industry Minister, Alan Kyeremanten to distance himself from a comment made by Hopeson Adorye in Kumasi.

Mr. Umar Farouk Aliu Mahama says the comment was a reckless one.

He says the failure of Alan Kyeremanteng to distance himself from it will hurt the fortunes of the New Patriotic Party in the 2024 general elections.

“The issue is that you don’t have a leading member like Hopeson on the campaign of our senior brother Alan Kyeremanten for him to be speaking like that and saying that northerners are supposed to be vice presidents that’s what it will be.

“It is a reckless statement and I mean even Alan Kyeremanten should distance himself from that thing because it can hurt us in the future,” he told Nana Jantuah on Nhyira FM’s Kuro Yi Mu Nsem show.

Mr. Hopeson Adorye is reported to have said “in the NPPs tradition, Northerners are fit for the running mate position” during a health walk dubbed “ Walk for Alan” held in Kumasi in the Ashanti region.

According to Farouk, even if Alan Kyeremanten wins the flagbearership of the NPP it will be difficult for him to solicit for votes in the north because of the reckless comment of Mr. Adorye.

“Can he come to Yendi to say he needs votes from the north?” quizzed Mr. Farouk Mahama. “Because of that reckless statement, it can affect the fortunes of the NPP”.

The son of late Vice President Aliu Mahama, says regardless of one’s region, everyone is eligible to lead the NPP.

“It is not in the NPP constitution that every time the NPP’s flagbearer should come from a particular group, it should be a level playing field for everybody.

“But when we limit it to say only the Akan people can lead the NPP, no, it doesn’t work like that,” he said.
Umar Farouk says in the run up to the NPP’s flagbearer polls, the party members should tone down on their choice of words since anyone who wins will need every vote of the party members to win election 2024.

He wants Hopeson Adorye to apologise for peace to prevail.

Meanwhile, Mr. Hopeson Yaovi Adorye has apologised for the statement he made at the pro-Alan Kyeremanten, “Aduru Woso Asanteman Health Walk” held in Kumasi.

According to organisers, the exercise, which was held on Saturday 13th August, 2022 aimed at boosting their health for the campaign to ‘break the 8’.

This statement has resulted in a backlash which has compelled Mr. Adorye to apologise.

In a press release dated August 15, the former MP for Kpone-Katamanso said: “Upon reflection, I realize that my statement may either have been misunderstood and offended some patriots, or deliberately turned around by political opponents for their misguided intentions. As much as it is not my nature, it definitely was not my intention to create this misunderstanding. I take full responsibility for my actions and sincerely apologize to all who are offended.”

Mr. Adorye used the opportunity to clarify that, “I am neither an Operations Director for Alan Kyerematen nor aware of any such campaign team created. Asanteman has spoken, Alan Kyerematen is NPP’s Unifier and the best choice for victory in 2024, and l am at peace with it.”

DISCLAIMER: The Views, Comments, Opinions, Contributions and Statements made by Readers and Contributors on this platform do not necessarily represent the views or policy of Multimedia Group Limited.
Tags:
Alan Kyerematen
Hopeson Adorye
Umar Farouk Aliu Mahama
Yendi MP