How Black Stars changed things at halftime to beat Nigeria 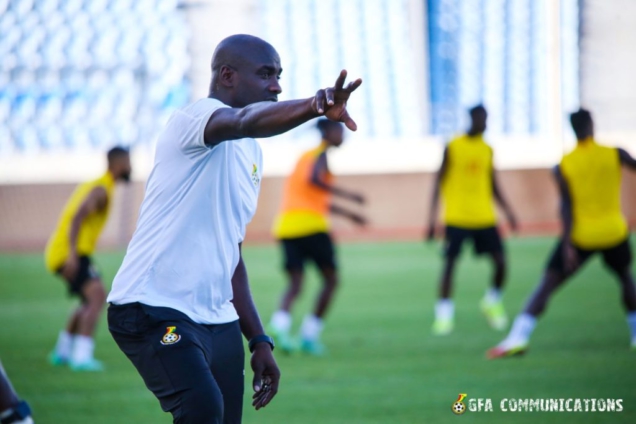 It was halftime in the second leg of the jollof derby, the Black Stars courtesy a 10th-minute strike from Thomas Partey, were still in the game but very much under lots of pressure from the Super Eagles.

At 1-1, all Nigeria needed was a goal to knock Ghana out of the run-in for the 2022 World Cup qualification, and 45 minutes plus extra time seemed more than enough time for Nigeria, who had created all the goal-scoring chances in the first half to score.

The Black Stars in a 4-2-3-1 were very much being overrun by their neighbouring rivals and many Ghanaian fans wondered if the team could hang on in Abuja.

In the dressing room however, there was a consensus, led by head coach, Otto Addo that the team direly needed to change their structure. It was a consensus which other members of the technical team in Didi Dramani, Chris Hughton and George Boateng agreed to.

Boateng in an exclusive after the Black Stars’ victory, explains to JoySports what went on behind the scenes.

“It’s brilliant because Otto was instrumental in that decision I have to say because, Otto since 1st Feb said the first game we can play 4-3-3 but second leg he wants to change it to 3-5-1-1 or 3-6-1. That was already discussed in the first meeting we (Hughton, Addo, Dramani, Richard Kingson and Boateng) had. So we decided to start with 4-3-3 and change in the second leg but because the players did so well in Kumasi and took on the style and formation, we decided not to change it.

“But it was always in the back of our head to change. In Accra, we did tactical sessions on the formation, so we were gradually embedding the idea we might change into that formation but since they took it on so well we decided not to change and if we hadn’t conceded the penalty we would have stuck to the formation but when we looked at the situation, the Nigerian team was pushing more and Otto said, ‘George, Chris, Didi let’s do it. We have only one game, we won’t get another chance.'” He said to JoySports.

Boateng also revealed that the four-man technical team had to split into smaller units so they could handle the half-time work in teams.

“We had to move really fast because the remaining players were out doing warmup and the 11 were already inside. So Otto said, ‘George you take care of the ones outside, prepare them, give them the set-pieces the roles, responsibilities – make sure they’re ready.’ So I got the names and said to Didi let’s sort out the set-pieces so he sorted out with me – I quickly run outside, informed Kofi [Kyereh] Andy [Yiadom] and Elisha [Owusu] what they had to do, did a quick warm-up and prepared them.

“It was really teamwork, Chris stayed inside with Otto so the 11 knew what’s going on – me and Didi were on the grass making sure the 3 coming on understand what’s happening, positions they’re playing and roles for and against setpieces.

“So we put it together and we were pretty much in control the whole of the second half.” George narrated to JoySports.

After 90+5 minutes, the four-man technical team had qualified a team, which only less than two months prior, had experienced its worse AFCON campaign, to football’s biggest stage, and they did so in the backyard of one of their biggest rivals.

President of Ghana, Nana Akufo-Addo during a Black Stars team visit to his presidential residence, urged the leadership of the GFA to maintain the technical team as Ghana begins preparations for the World Cup.