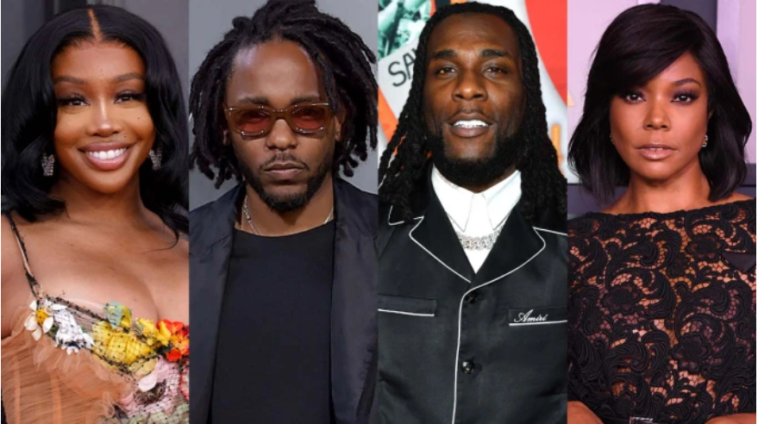 The vivid West African country of Ghana, which was historically used as a prominent port in the British trade of enslaved peoples, is increasingly on the map as a tourist and cultural destination, especially for Black Americans and entertainment industry stars including Kendrick Lamar, Gabrielle Union, SZA, Meek Mill and Chance the Rapper.

This winter season is destined to be especially busy thanks to a pair of festivals, one returning, one new, that focus on using the power of entertainment to reunite the global African diaspora. “People are discovering [Ghana], which is part of the process of reconnecting because it’s in our blood,” says Ghanian American Queen Sugar actor Kofi Siriboe, who has been visiting his ancestral land regularly since 2016.

On Dec. 28 and 29, the annual Afrochella music fest, now in its sixth year, kicked off. This year’s lineup included an all-star roster of musical talent, including Burna Boy, Fireboy BML, Shatta Wale and many others including homegrown stars Stonebwoy, Gyakie, King Promise and Kids. This year’s experience, which is curated around the theme of “Afrofuturism,” also features a two-week “Afrochella Expo,” a series of panels, screenings and discussions that will explore topics related to innovation and growth in Ghana and throughout the continent.

And fresh into the new year, Chance the Rapper and Vic Mensa will host the inaugural Black Star Line Festival — billed as “a cultural experience rooted in intercontinental collaboration” — on Jan. 6 at the historic Black Star Square in Accra, Ghana. Beyond the concert — which will see performances from its co-founders plus Erykah Badu, T-Pain, Jeremih, Sarkodie and more — there will be a weeklong series of panel discussions, fine art exhibitions and nightlife events surrounding the occasion.

Named for Pan-African leader and activist Marcus Garvey’s short-lived Black Star Line, a steamship company and shipping line created specifically for transit across the Black diaspora, the Black Star Line Festival (which also inspires visions of the black star in the center of the Ghanaian flag) is “a radical diasporic intersection of music, thought and creativity at a moment when the international African is evolving rapidly and Ghana is serving as a gateway to the continent,” according to a letter from the founders on the official website.

In an interview with Rolling Stone, Chance the Rapper said: “There’s plenty of successful homebred concerts and festivals in Ghana, but one that was a specifically Pan-African event that links arts and culture along with the music was something that we felt like we would be good to put together. … Ghana is, in a lot of ways, the center for global Blackness and has, over the years, become just this destination for Black folks, not just in the U.S., but in the islands and in the U.K., to spend time and to create relationships.”

This trend endures, as countless other Black American musicians and actors have made pilgrimage trips to the country more recently, with similar considerations in mind.

In June of this year, Kendrick Lamar released A Day in Accra, Ghana, a mini-documentary in partnership with Spotify, which chronicles his first trip to the country with stops at places like Virgil Abloh’s Ghana Freedom skatepark. And in September, Danai Gurira was joined by Good Morning America’s Robin Roberts on a trip to Ghana surrounding the premiere of Black Panther: Wakanda Forever.

In October, Gabrielle Union celebrated her 50th birthday by visiting several countries in Africa, including Ghana. There, she participated in the “Last Bath” ritual at Assin Manso, an ancestral river where slaves would have bathed before being taken to the ships determining their fate. In an interview with iNews UK during the press tour for the new Disney animated film Strange World, Union said: “I felt like I was being fortified and forged in the fires of my ancestors. I’d never been more clear. My soul has never felt cleaner or lighter. It’s my superhero origin story.”

Afrochella first began as purely a party in 2017 and has blossomed into one of the biggest annual events in Ghana, using entertainment as a tool for repatriation and learning. “We started [it] to celebrate the culture and we felt that the four things that we could use as a medium for communication were food, music, art and fashion,” Abdul Karim Abdullah, co-founder and CEO of Afrochella, tells THR. “We understand tourism is highly boosted by any of these mediums … our festival has always considered itself a bridge between the diaspora and the continent, through Ghana.” The full 10-day Afrochella cultural experience is promoted through travel packages — which include flights, lodging and tours around the country — created in tandem with partners like global travel company Travel Mo, which recommends visitors stay in Accra’s Labadi Beach Hotel, Kempinski Hotel Gold Coast City or the Tang Palace Hotel. (In October, Goldenvoice, the owner and organizing partner of Coachella, filed a California lawsuit against Afrochella for trademark infringement after the festival’s organizers filed to trademark the Coachella name in Ghana and for “intentionally trading on the good will” of the California festival’s name and trademarks, in a case that is ongoing.)

“December in Ghana, and Africa in general, is really a time when people tend to go back home for a homecoming experience,” Abdullah says. “When we first started, Ghana was really big on nightlife. But there were so many amazing people that were doing great things in different industries coming into Ghana annually, and I felt we didn’t have that many gathering places to connect people … so we wanted to create a space where we could not only do that but also invite some other friends from the diaspora to see all the amazing things happening on the continent, hopefully fostering an environment where we could work together and build each other things.”

According to Abdullah, the demographic of people who attend Afrochella has changed considerably year to year: In 2017, roughly 30 percent of attendees were from outside of Ghana, and in 2018, that number grew to 40 percent. In 2019, the number of people attending jumped to 16,000 compared to 12,000 the previous year. That’s thanks in part to Ghana’s Ministry of Tourism, which worked to engage members of the global African diaspora to visit the country in 2019, also known as Ghana’s “Year of the Return,” an intentional campaign marking 400 years since the first enslaved people were taken from the coast of Ghana to eventually end up in Jamestown, Virginia.

“In 2019, we saw a very big boom in the amount of people coming in from the U.S. because it tied into [the initiative],” Abdullah says. “Most people abroad tend to get their teachings from secondary or tertiary sources, like TV. So now being able to come to Africa yourself to experience and also learn from the people who actually create these experiences and teach you exactly what the culture is, the history of slavery, what our food tastes like … those kinds of experiences are priceless for you to be able to get directly from the source.”

Annually, the Afrochella team hires between 750 to 1,000 Ghanaian locals for seasonal work, and the festival also started the Afrochella Foundation in 2019 to lead philanthropic efforts — like educational scholarships and awareness surrounding food insecurity — in the community.

“Really our mission is just to leverage the influx of tourism that’s coming to Ghana,” says Gifty Boakye, head of the foundation. “People come obviously to experience the festival, but then they get to Ghana and they realize, ‘Wow, I’m in Africa. There’s people here that live happily with so little.’ So we give them that opportunity to experience how it feels to give back even if they’re only in town for the week of the festival.”

The latest tourism report released by the Ghana Tourism Authority for 2021 saw 623,523 arrivals with a corresponding $803.8 million in revenue representing a 107.7 percent jump from the preceding year. The Ghanaian Ministry of Tourism, Arts and Culture (MoTAC) projects an increase in international tourism arrivals into Ghana in 2022 to one million visitors, and anticipates $2.3 billion in revenue this year.

A number of Black Americans are moving permanently to Ghana as well, with some migrating there as a response to hostility encountered in the U.S. and incidents of white supremacist violence. Since 2020, a reported 5,000 African Americans have relocated to the country. (During a ceremony in Accra in honor of George Floyd’s 2020 murder, Ghana’s tourism minister Barbara Oteng Gyasi said: “You do not have to stay where you are not wanted forever.”) In 2021, Stevie Wonder announced he’d be permanently relocating to Ghana in an interview with Oprah Winfrey, saying: “I don’t want to see my children’s children’s children have to say ‘Oh please like me … please know that I’m important, please value me.’”

Siriboe, who recently ended his seven-season tenure on OWN’s Queen Sugar, tells The Hollywood Reporter that when he first visited Ghana six years ago, “It was fresh, it was calm, nobody was there.

“As a human being and as an artist, what roots us is our intention, and we need direction. Once I started working on Queen Sugar and life started moving fast, you kind of start rethinking everything, and I was looking for new intentions and new anchors,” Siriboe explains. “I realized the new anchor was reconnecting with my home.”

Over the years, he has seen a growing number of Black American peers in and outside of the entertainment industry visit the country — this past September, SZA visited the continent for the first time when she performed at Global Citizen Festival along with Usher and John Legend in Accra, Ghana — and counts the climbing popularity of Afrobeat music as an indication of how common travel to and interest in West Africa has become.

“I have friends in Los Angeles and in New Orleans [where Queen Sugar filmed] who send me Afrobeat songs and artists I was recently introduced to a little earlier, but I see how the music is parallel to the continent as a whole,” Siriboe says. “As Black people, we’re looking for new space. America told us a long time ago what we meant to this country, and we’ve spent a lot of time asking for things like respect.”

Now that shooting has wrapped on Queen Sugar, Siriboe has future plans to move to Ghana, and predicts “a new Africa” will emerge in the next 20 years. “The land is beautiful, the people are beautiful, the food is good, the soil is rich. It’s not lacking anything. It’s just open and waiting for people to tap in.”

Gail Bean, who currently stars as Wanda Bell in FX’s Snowfall, first visited Ghana in 2016 and has been going back every year since.

“As an actress, our careers are basically in flux. You never know when you’re going to book something, but the guaranteed vacation when we know production offices will be closed is during the Christmas holidays to like the second week of January. So I told myself after the first visit to Africa, I’m going back every year to bring in my new year,” she says.

Bean is currently building her first home in Ghana, and thinks a Black production studio — like Tyler Perry’s in Atlanta, Georgia — would be “amazing.”

“A lot of the time, projects go and shoot in Canada, or other places for because it’s cheaper, [for instance]. I know it would be extremely helpful to the economy in Africa,” Bean says. “We fit in with the locals. Being in a place where we as Black people are the majority, it’s a different feeling. Its very warm and beautiful, self-reassuring. It gives you a sense of self-esteem and happiness that I hope every Black person gets to experience.”

DISCLAIMER: The Views, Comments, Opinions, Contributions and Statements made by Readers and Contributors on this platform do not necessarily represent the views or policy of Multimedia Group Limited.
Tags:
African diaspora
Afro Nation
Afrochella