How to be a more environmentally friendly coffee drinker 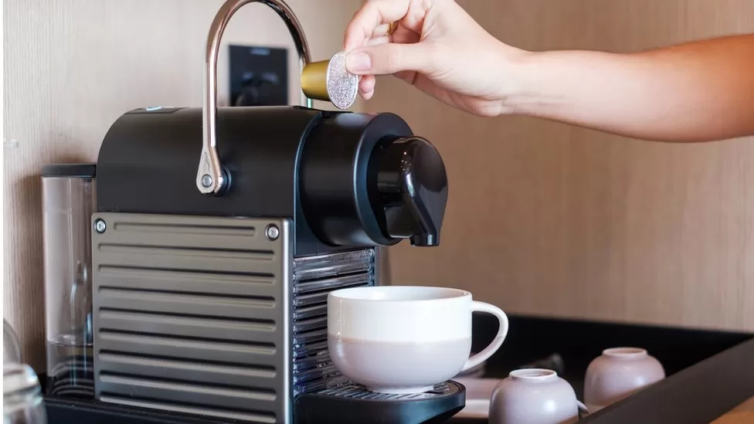 When it comes to making a cup of coffee, capsules have a reputation for being environmentally unfriendly, as they are often hard to recycle.

But new research by the University of Quebec in Canada suggests that pods may not be as wasteful as preparing coffee using a traditional coffee maker.

The study gives new insight on the climate impact of the world’s most popular drink: it is estimated that two billion cups of coffee are consumed daily worldwide, with the average American drinking three cups a day.

While coffee is prepared in a variety of ways, coffee capsules have risen in popularity since their invention some four decades ago. The market value of coffee pods grew 24% from 2021 to 2022, bringing in $12.33bn (£9.92bn) globally.

Despite their popularity, capsules have long divided coffee drinkers who are conscious of the effect their caffeine habit has on the environment.

The small plastic or aluminium pods have been criticised for being energy-intensive to produce and for causing “unnecessary waste”. The German city of Hamburg even went as far as banning their use from state-run buildings in 2016.

However, researchers now say that pods may not be as wasteful as other ways of making coffee, especially when looking at the broader life cycle of a single cup.

In their study, a literature review of research done on coffee consumption over the years, the researchers measured the total Greenhouse Gas (GHG) emissions produced by each method of preparing 280 millilitres of coffee.

Their analysis considered the entire process – from production of the coffee beans (which is the most GHG-emitting part) to the amount of waste that ends up in a landfill after the cup is finished.

The outcome slightly differed based on how the coffee is prepared. For example, researchers also looked at emissions when more coffee than needed is used – a common occurrence as most people don’t measure their coffee before they prepare it.

They also analysed the difference of emissions in the Canadian province of Alberta – the second highest GHG emitter in Canada – versus Quebec, which has the lowest emissions.

On average, the method that produces the second-most emissions is brewed coffee using a French press, also because of the amount of coffee that is needed to make a single cup.

Coffee capsules are third on the list. The amount of coffee inside each capsule is controlled, which prevents overconsumption – a capsule saves between 11 to 13 grams of coffee, the study found.

Instant coffee is the most environmentally-friendly way to make a brew, the study found, because it uses less coffee, and water kettles use less energy than the traditional coffee maker.

How to drink coffee with minimal impact on the environment

On the surface, one thing that coffee drinkers are unable to control is how much emissions coffee production itself actually produces.

“The agricultural phase is the most polluting,” Mr Viana said.

No matter the method in which the coffee is prepared, the harvesting and production of the beans makes up 40% to 80% of emissions, as growing coffee uses intensive irrigation, fertilisation and the use of pesticides.

It is why coffee capsules are not as harmful as using more coffee than one needs to make a single cup despite the perception that pods cause more physical waste.

“I don’t think that capsules are a miracle solution,” Mr Viana said. “But it is a good example that illustrates our cognitive biases.”

With the life cycle of a coffee cup in mind, Mr Viana advised people to drink smaller amounts of coffee. This means opting for 50ml to 100ml espressos, or ensuring that only the needed amount of coffee and water is used when preparing a cup to avoid waste.

And even when using capsules, Mr Viana cautioned against overconsumption as the ease of coffee pods may encourage people to drink more altogether, which then produces more waste.

“Reusable pods, if used for a long time, are a solution to reduce the amount of waste,” he added.

DISCLAIMER: The Views, Comments, Opinions, Contributions and Statements made by Readers and Contributors on this platform do not necessarily represent the views or policy of Multimedia Group Limited.
Tags:
Coffee
University of Quebec