How to calculate your dog’s real age

Your pet clearly ages faster than you do, but new research is giving us a much clearer idea of just how old your dog really might be.

The underlying assumption is that each calendar year a dog lives through is equivalent to seven human years at any stage of a dog’s life. But new research suggests that things aren’t so simple. And if we look at some basic developmental milestones, it’s clear why.

For example, most dog breeds reach sexual maturity between the ages of six and 12 months – the upper end of that range corresponding, by the traditional conversion, to a human age of seven. And at the other end of the spectrum, although unusual, some dogs have been known to live for over 20 years. Under the “factor-of-seven” conversion rule, this would equate to an unfathomable 140 human-equivalent years. 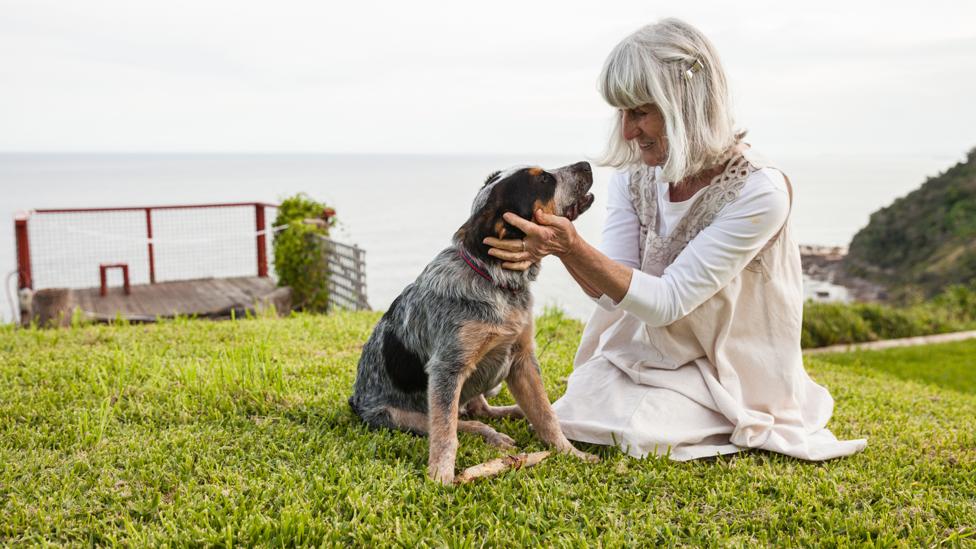 New insights into how dogs age suggest our pets move into middle age more rapidly than most owners might suspect (Credit: Getty Images)

All of this raises the question of what exactly we mean by age. The most obvious way to describe it is simply the length of time that has passed since birth. This is known as the chronological definition of age.

However, there are other descriptions. Biological age, for example, is a more subjective definition, which relies on assessing physiological indicators to identify an individual’s development. These include measures like the “frailty index” – surveys that take into account an individual’s disease status, cognitive impairments and levels of activity.

Then there are the more objective ageing biomarkers, such as levels of gene expression (genes produce proteins at differing rates at different stages of life) or numbers of immune cells. The rate at which biological age increases depends on genetically inherited factors, mental health and lifestyle. 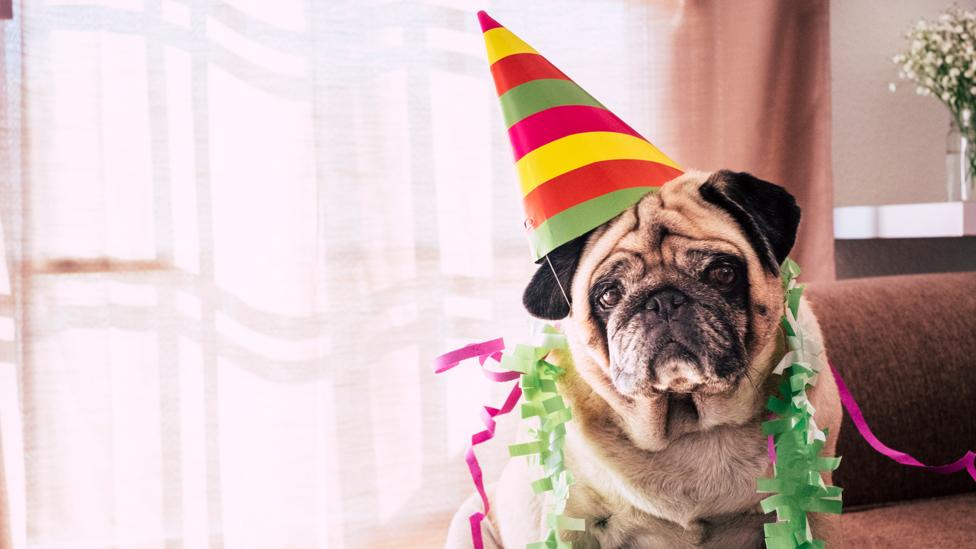 Rather than celebrating chronological age, looking at the levels of methylation on a dog’s DNA is a much more accurate measure of aging

For example, if you’ve spent a lot of time eating junk food and smoking cigarettes instead of taking exercise and eating healthily, the chances are your biological age will exceed your chronological age. Or, you might be a 60-year-old with the body of a 40-year-old if you’ve looked after yourself well.

When it comes to comparing animal ages across species, the biological definitions of age are far more useful than their chronological counterparts. Knowing a hamster is six weeks old doesn’t give you a good picture of that animal’s life stage, even if you know the life expectancy of a hamster is only three years. Learning that a hamster has reached an age where it can reproduce gives a much better picture of its level of maturity.

The authors of the new ageing study suggest that a sensible way to measure biological age is though so-called “epigenetic clocks” – changes to the packaging of our DNA that accumulate over time in all mammals. 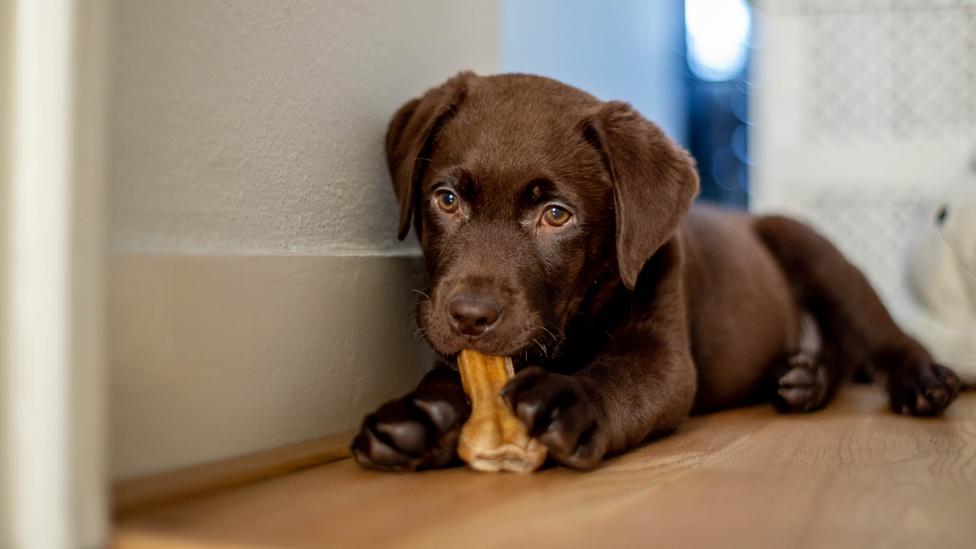 In their first year of life, puppies grow up so quickly that they age the equivalent of 31 human years

In particular, “methylation” – the addition of methyl groups (a carbon atom bonded to three hydrogen atoms) to DNA – seems to be a good indicator of age. Many prominent physiological markers, such as the development of teeth, seem to occur at the same levels of methylation across different species. So by matching the levels of methylation in Labrador retrievers and humans, the researchers derived a formula to map dog age to its human equivalent.

Here “ln” represents a mathematical function known as the natural logarithm. The logarithm function is well-known in the non-linear scales for energy released during earthquakes (Richter) or for measuring sound (decibels). It comes in useful for measuring quantities whose sizes vary over many orders of magnitude. It’s even possible that a logarithmic experience of the passing of time might explain why we perceive time speeding up as we get older.

In the graph below, you can see how the natural logarithm works to convert the years a dog has lived (dog age) into the equivalent human age in the red dashed curve. The curve suggests that dogs mature extremely rapidly at first, but that their ageing then slows down, meaning that most of their lives are experienced as a form of protracted middle age.

A handy short cut is to remember that the first dog year counts for 31 human years. Then, after that, every time the dog’s chronological age doubles, the number of equivalent human years increases by 11. So eight calendar years represent three “doublings” (from one to two, two to four and then four to eight) giving a dog age equivalent of 64 (that’s 31 + 3×11).

This useful approximation is plotted as the black curve on the conversion figure below. The green line represents the discredited factor-of-seven rule that suggests unrealistic ages at the higher end of the dog age spectrum. 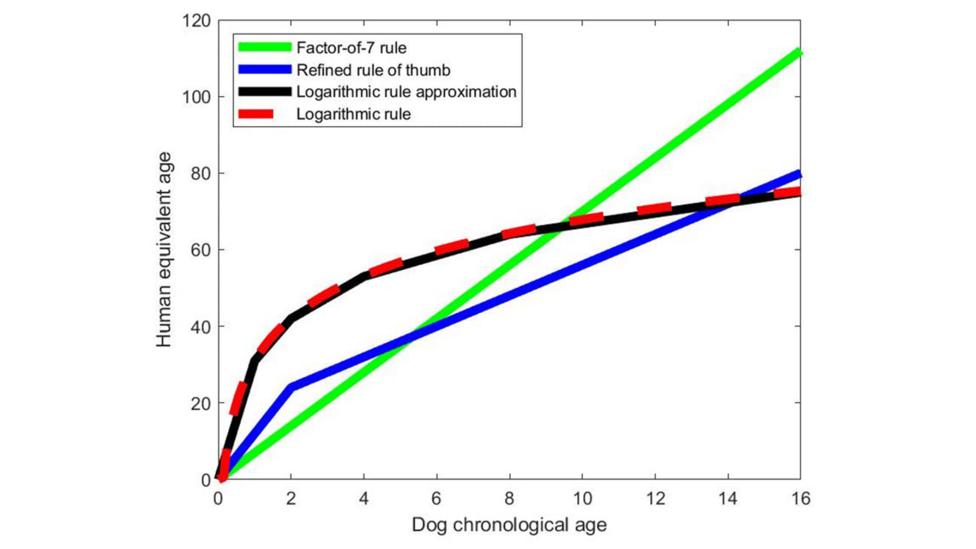 Most dog lovers will already have suspected that the human-to-dog age relationship is non-linear, having noticed that, initially, their pets mature much more quickly than the linear factor-of-seven rule suggests.

A more sophisticated refinement to the factor-of-seven rules has suggested that each of the dog’s first two years correspond to 12 human years while all subsequent years count for four human equivalents. The blue curve in the above figure, which represents this ad hoc rule, shows better agreement with the new logarithmic law.

In practice the new molecular insights into human-to-dog age conversion encapsulated by the logarithmic law suggest that dogs move into middle age even more rapidly than most dog-owners would have suspected. It’s worth bearing in mind, when you find that Rex is reluctant to chase the ball like he once did, that he’s probably got more miles on the clock than you’ve been giving him credit for.

Christian Yates is a senior lecturer in mathematical biology at the University of Bath. He is also the author of The Maths of Life and Death.