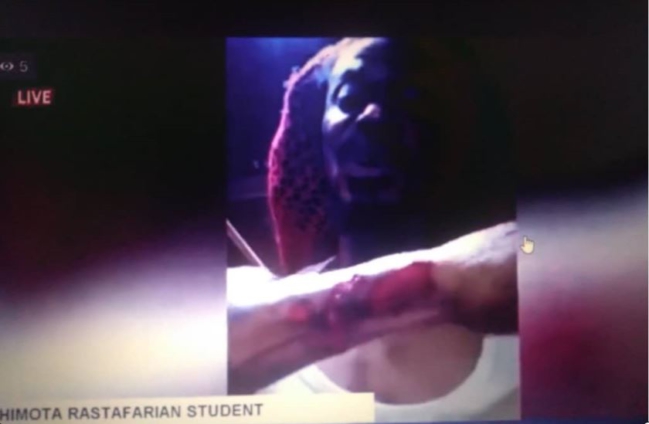 Father of Tyron Marghuy, one of the two Rasta students who were initially denied admission to the Achimota School, has apologised to the public for accusing his son of assault.

Tereo Marghuy says his son did not hold anything he could have used to hurt or stab him as was portrayed in the video, admitting he rushed into leaking the video on social media.

“I would apologise to everybody that something like this happened, and also, for people to think that it’s Tyron who directly did something to me – it wasn’t so. It’s after the struggle that I found out that I had all these bruises.

“But if you check the video, you can definitely tell; I mean, what could he have used? I know he wasn’t holding anything. He just held my hand and we were struggling up and down. You know, sometimes when anger comes, you say things before later you see that you shouldn’t said it in that way,” he told Accra-based Citi FM on Wednesday.

Venting his spleen in a viral video on social media, Mr Marghuy accused his son of being very disobedient lately. He also displayed a wounded hand, which he claimed was caused by Tyron.

He explained that his recent predicament was caused by an attempt to resolve an impasse between Tyron and his sister.

“This is the third time something like this is happening, because, he walked over me and I rushed at him. I wanted to slap him for doing that.

“He does it every time and he gripped my hand, so hard, I don’t know if he had something or whatever with him, and this is what he has done,” he said while showing his hand to the camera.

Tereo Marghuy stated in the video that even the Achimota case, “he [Tyron] was so arrogant, so I wasn’t even ready to follow him anywhere, I went to the court with him and defended him just for the sake of humanity; for the sake of Rasta, if it had been only because of this boy, I wouldn’t have gone.”

But speaking to the media after the family met the Child Rights International over allegations and threats he made, Tereo Marghuy described the incident as unfortunate.

He did not anticipate the video would be leaked on social media because he only shared the info with a few people for advice.

He has, however, pleaded with Ghanaians to forgive him of the whole incident, pledging it would never happen again.

“He just held my hand and we were struggling. All what happened shouldn’t have happened. We should cool our tempers and sort it out. It is rather unfortunate it came out and people have formed their own impressions.

“If it has really hurt anybody, I am really sorry. I apologise to everybody that something like this had to happen,” he noted.