'I couldn't remember anything when I entered class' - Student recounts first day of lecture after UTAG strike - MyJoyOnline.com 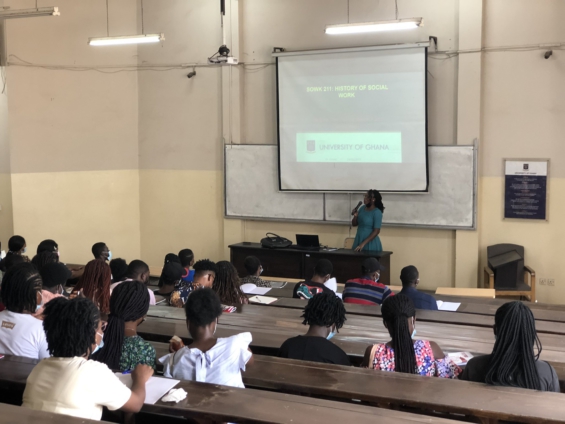 Lecturers and students of the University of Ghana begin classes for the semester [Photo credit: Radio Univers]

Public universities after almost 2 months of no academic work due to a strike action, resumed lectures on Monday, February 28.

This comes after the University Teachers Association of Ghana (UTAG) suspended its strike to comply with a court order to resume work after an injunction was granted to the National Labour Commission (NLC).

The University of Ghana, Legon, Kwame Nkrumah University of Science and Technology (KNUST), Ghana Institute of Journalism (GIJ), among others were affected by the strike action.

JoyNews visited the various campuses to ascertain whether or not lecturers had headed back to the classrooms as directed. A visit to the University of Ghana revealed that teaching and learning took place as expected.

Interacting with JoyNews’ Manuel Koranteng, one of the students shared her experience on her first day.

The student indicated that her first day of lectures felt like a clean slate. This is because she had forgotten all that she had learnt. However, during the course of the lectures, she managed to catch up.

“I lost everything. I couldn’t remember anything when I entered class but when he started the lectures, I started following and I got to understand.”

Due to the challenges she faced, she prayed that “they (UTAG) don’t come up with this strike action thing again.”

Some students also expressed uncertainty on whether lectures would come off due to a statement by the UG-UTAG chapter and an immediate reply from the school’s management.

In Kumasi, students of the Kwame Nkrumah University of Science and Technology also shared their experiences.

A student who interacted with Luv Fm’s Emmanuel Bright Quarcoe expressed joy as he finally got introduced to the course he will be studying in the 2021/2022 academic year.

His class was furnished with the course outline and were provided with details of what would be expected of them.

“It was a very interactive class,” the said student described his first day of lectures.

Others were not fortunate to have their lecturers be with them on their first day. In an Agricultural Biotechnology class, the students were welcomed by a Teaching Assistant (TA).

Meanwhile, the suspension of the strike action by UTAG is expected to last until March 4 as government engages with the Association to meet its demands.

A referendum conducted by UTAG’s National Executive Council showed an overwhelming rejection of the suspension of the strike by UTAG members in the public universities.

The lecturers are expected to consider the outcome within five days according to UTAG regulations.

Coincidentally, the said period falls within the five days that the constitution gives for an injunction to duly elapse.

This provides the Association ample time to make a decision as to whether to resume the industrial action or not; depending on the outcome of negotiations with government and stakeholders.

On the other hand, President Akufo-Addo has assured university lecturers of government’s commitment to finding a lasting solution to their strike action.

Speaking at the 2022 National Labour Conference on Monday, February 28, the President said the government will ensure a satisfactory solution to the impasse to prevent the academic calendar from being derailed.

“The best form of negotiation are those in which both parties in dispute exhibit good faith within the context of what is affordable and equitable. I continue to hope that we will see this in that light and help bring the impasse to an end so that the education of our young people can resume in solemnity. I assure you of government’s commitment in addressing your concerns at all times,” the President noted.