I didn’t disrespect the Speaker; I only wanted the right thing done – Alhassan Suhuyini 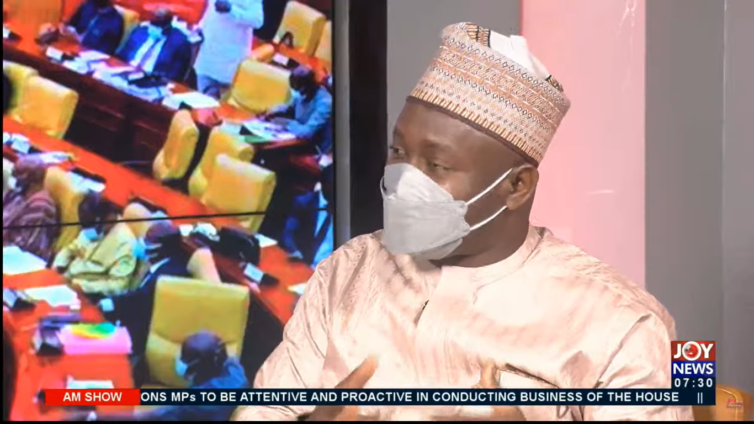 Member of Parliament for the Tamale North Constituency, Alhassan Suhuyini, has refuted claims that he disrespected the First Deputy Speaker of Parliament, Joseph Osei-Owusu, during parliamentary proceedings on Friday.

Speaking in an interview with Evans Mensah, on Top Story, on Friday, the NDC legislator explained that, contrary to the claims of insubordination, he only wanted to draw the Speaker’s attention, to a procedural breach, which had to be rectified.

Mr. Suhuyini added that, the disregard for the standing orders compelled him to walk out of the chamber, after the Speaker refused to ensure that quorum was formed.

“I was not even forcing the Speaker to adjourn the House. I mean at some point, he suggested that the standing orders give him so much powers. And that he can even suspend the standing orders and allow business to continue. So what I was simply seeking from the Speaker was for him to pass a judgment on my motion, to rule on the motion.

Even if his ruling was going to be that, because of the seriousness of the private business the House was was engaging in, I am suspending the standing orders, so that business can carry on, he just needed to do that. But not to treat my motion with disdain, with disregard and to just ignore the processes and violate the Constitution and violate the standing orders in the manner that it was done”, he stated.

The clarification from the Tamale North MP, was in response to earlier accusations from the Majority Caucus, who argued that Alhassan Suhuyini, disrespected the First Deputy Speaker.

According to the Majority, Mr. Suhuyini’s walk out was a reprehensible conduct. But Mr. Suhuyuni said, the Speaker deliberately chose to ignore him despite several attempts to grab his (Speaker’s) attention.

During proceedings on Friday, Alhassan Suhuyini raised an objection over the lack of quorum to transact business. But after close to 40 minutes of no response, he attempted to obstruct proceedings while the Roads Minister, Kwasi Amoako-Atta was responding to questions on the floor of the House.

Meanwhile, the Majority Leader, Osei Kyei-Mensah-Bonsu, has announced that the controversial E-levy Bill, will not be discussed in Parliament, next week.

Speaking on the floor of Parliament on Friday, the NPP lawmaker disclosed that government is still making consultations on the Bill, therefore it will not be ripe for deliberations next week.

According to him, his outfit will announce the agreed date for the discussion of the E-levy Bill within the course of next week.

“Mr. Speaker, having said so, I think what is significant, should also be the date which unfortunately, has not found expression on the business page for next week. [It is] the issue at hand, which we may have to attend to, at one time or the other. Be assured that, Mr. Speaker, next week, the House, will not consider it”, he stated.

DISCLAIMER: The Views, Comments, Opinions, Contributions and Statements made by Readers and Contributors on this platform do not necessarily represent the views or policy of Multimedia Group Limited.
Tags:
Alhassan Suhuyini
Joseph Osei Owusu
Parliament